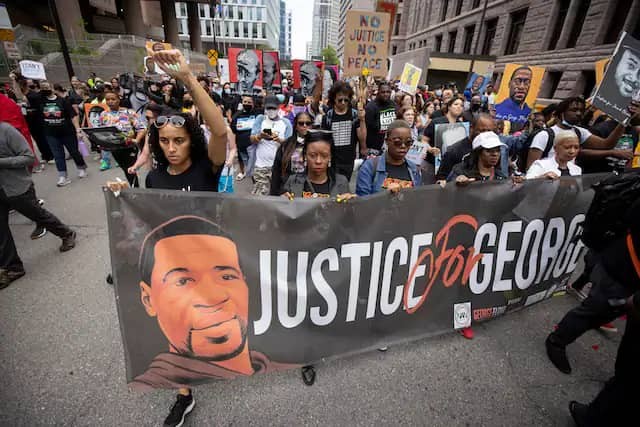 The streets of Minneapolis is filled up with Demonstrators on Sunday marking the one-year anniversary of George Floyd’s death.
However on Tuesday, a year after George Floyd was killed at the hands of a Minneapolis police officer, his family members will fly to Washington D.C.
for a private audience with President Biden, their first in-person meeting with the president since they buried Floyd.
Meanwhile, white House press secretary Jen isPsaki said Biden is “eager to listen to their perspectives and hear what they have to say,” an unfulfilled promise looms over the meeting as progress on police reform has stagnated, including legislation bearing Floyd’s name that Biden had hoped would be law on the anniversary of his death.
Floyd’s murder, and the graphic video that exhibited his final breaths, provoked an often incendiary conversation about the role race plays in criminal justice, economics, education, and other aspects of American life. But a conversation about systemic racism does not equate to action to dismantle it, and as the nation passes the grim anniversary, activists say that the politicians who embraced change have often failed to enact it.