Swaziland: Pornographic Photos And Sex Tourists - The Sleazy Side Of Swaziland's Reed Dance 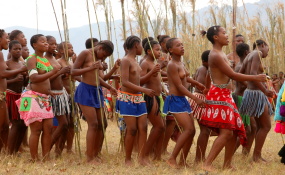 Photographs of the women and girls who dance bare breasted and in short skirts and some with no underwear in front of Swaziland's absolute monarch King Mswati III at the traditional Reed Dance are appearing on pornography websites across the world.

The half-naked dancers, some as young as 11, are also said to be attracting 'sex tourists' to the kingdom. Also, some of King Mswati's American backers told him the sight of a middle-age man watching tens of thousands of semi-clothed women dance for him gave Swaziland a bad image as there was an obvious 'sexual undertone' to it.

The next annual Reed Dance (also known as Umhlanga) takes place in Swaziland (renamed Eswatini by King Mswati on his fiftieth birthday earlier this year) on Monday (3 September 2018). If past years are a guide possibly as many as 100,000 women, often described as 'maidens' or 'virgins' by media in Swaziland, will dance. The Reed Dance is considered a major traditional cultural event and takes place each year.

Ahead of this year's event Nonduduzo 'Zuzu' Zubuko, the leader of the women who dance and who are called the Imbali Regiment, told participants, 'Part of the things that our culture teaches us is to dress appropriately for the ceremony you are attending.'

The Swazi Observer (16 August 2018), a newspaper in effect owned by the King, reported her saying, 'You are also expected to attend in your numbers as our culture teaches us to always respect and attend to royal commands. This must start at chiefdom level. You are also expected to always attend community meetings called by your leaders and this spreads to the whole country where you should show respect to the highest authority of the kingdom.'

The newspaper added, 'She implored Imbali to be proud of who they are and their culture. "You must wear that outfit with pride because you are indeed the pride of the nation.

The traditional dress means going topless and wearing very short skirts. The women are encouraged by traditionalists not to wear underwear.

The dancers make easy pickings for people wanting to take photographs and use them for pornographic purpose. A simple search on Google highlights how many sites, some of them demanding payment to view, exist.

There are also concerns that people who come into Swaziland to attend the event are 'sex tourists'. As long ago as 2006 Independent-on-Line (IOL) newspapers in South Africa reported they came from all over the world.

'Some of them, mainly male European tourist armed with video cameras and modern digital cameras, are not afraid to admit that "it is the only place in the world where we can see bare-breasted women and buttocks".'

It also interviewed tourists from South Africa, Chile and China.

It added, 'Even though the tourists were told not to take photographs of the girls below the waist, it was evident that most of them - mainly men - were taking photographs as they wished.

'It was also striking that when the very young maidens passed before the King and the photographers, no one showed much interest. But when the teenagers and the young women danced, photographers flocked towards the girls.'

'On the second day of the Reed Dance, in the morning, some tourists watched the girls and took photographs of them while they were bathing in the nearby river. Motorists, too, were spotted luring the girls by promising them food and money.'

It added, 'A man from Chile who claimed to be a "freelancer"', stood among the girls in the Lusushwana River, taking photographs.'

King Mswati himself has been criticised for continuing with the tradition of the half-naked dancing. The New Republic, an American news magazine, reported that conservative backers of the King in the United States disapproved of the Reed Dance.

In 2008 it told the story of the King's visit to the US. Joe Szlavik, who was a public relations operative working on behalf of the King, took him to meet with Chris Smith, a socially conservative Republican representative from New Jersey and then chairman of the House Foreign Affairs Subcommittee on Africa.

The New Republic reported, 'Szlavik, whose firm was pulling in $20,000 per month from its Swaziland account, had some difficult news to deliver about a certain Swazi custom. "You have this Reed Dance, with these virgins," he explained to me [the author of the article] recently. Szlavik's message to his client was simple. "Listen to me," he implored the King. "You got to stop this."

The New Republic reported, 'Smith "understood there was a traditional part to the dance but in light of the gravity of the HIV situation [thought] maybe they could put tradition aside," Szlavik recalls.

'Such arguments were lost on King Mswati. "Look Joe, I understand the whole thing with the West, but we look at breasts like you look at feet," the monarch told him. It wasn't an unreasonable point. In some rural African cultures, women refraining from wearing tops is about as common as US postal workers wearing shorts in the summer. But try explaining that to a conservative Republican congressman.

'"I like breasts personally," Szlavik, a fast-talking cheerful man of about 40, told the King. "But, you know, there's a sexual undertone to it clearly."'

Not all the women and girls who dance half-naked for the King do so willingly. In 2016, the Guardian newspaper, a respected international publication based in the United Kingdom, reported that many participants were forced to attend the Umhlanga. It quoted a 29-year-old teacher saying, 'They say we are not forced, but we are. Families who don't send their daughters to the Umhlanga have to pay a fine, usually a goat or a cow.'

In 2014, it was reported by media within Swaziland that girls were told if they did not attend that year's Reed Dance they would be publicly whipped. Girls in the Mbilaneni chiefdom were told that if they travelled to the event but do not attended the ceremony, they would be beaten on the buttocks when they returned to their homesteads.

Thami Thikazi, the headman of the Mbilaneni chiefdom, said if parents disagreed with the punishment they would be forced to wield the lash themselves.

The Swazi Observer reported at the time Thikazi said, 'In case parents distance themselves from such, we are going to order them to be the ones administering the punishment in the form of strokes on the buttocks should it be found that they (girls) did something intolerable. The punishment will take place in full view of everyone.'