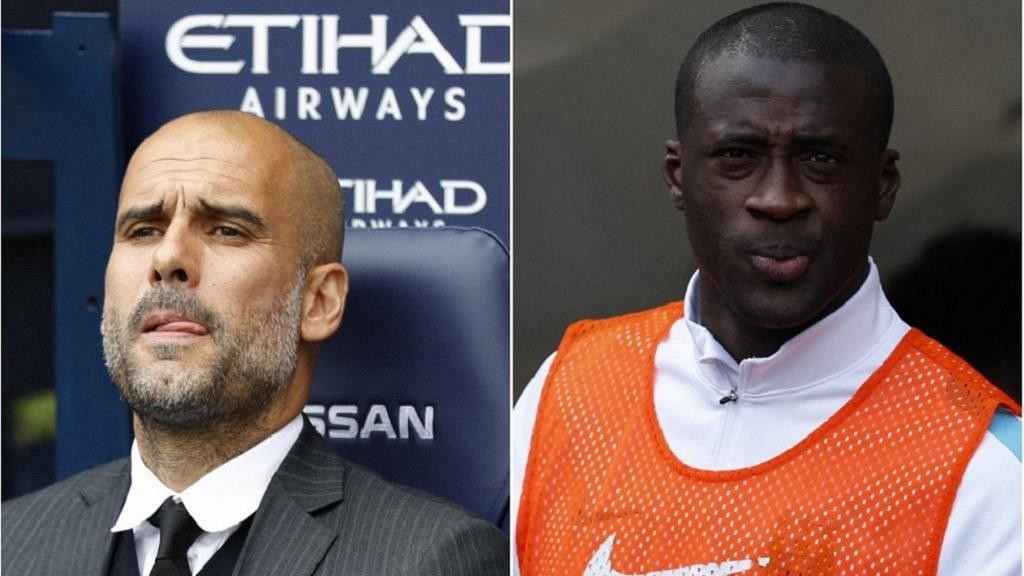 Ivorian international Yaya Toure has accused Pep Guardiola of seeking “revenge” against him. In a hard hitting interview to be aired on Tuesday by France Football, Yaya claimed that the Manchester City manager’s coaching reputation is “a myth” and that he did “everything to spoil” the Ivory Coast midfielder’s last season at the club.

Toure believes he was unfairly singled out and alleged that Pep refused to select him for matches out of spite. The 35-year-old Ivorian left City in May after eight seasons at the club but became increasingly marginalised as they claimed the Premier League title with a record number of points. It was not the first time that he had found himself surplus to requirements under Guardiola, having left Barcelona in 2010 to move to the Premier League.

“He was cruel with me. Do you really think he could’ve been like that with Iniesta? It got to the point I asked myself if it was because of my colour. I’m not the first, other Barça players asked the question too,” France Football’s Pascal Ferré quotes Yaya in his interview.

“Maybe us Africans aren’t always treated the same by certain people. When you see the problems he (Pep) has often had with African players, everywhere he has been, I ask myself questions,” Toure said.

He continued: “Pep is too intelligent to be caught. He’ll never admit it (not liking Africans). But the day he picks a team with five Africans in, I promise I will send him a cake!”

Toure had to wait until the final home match against Brighton last month for his first Premier League start of the season.

“I think I was dealing with someone who just wanted revenge on me,” he goes on. “I do not know why but I have the impression that he was jealous of me, that he took me for a rival. There you have it. We always looked at each other weirdly. He was spinning around me without saying anything, watching me, gauging me, but not talking to me. Yet he knows that I speak Catalan, Spanish and English. It should be enough to communicate both. But apparently no … Every time we passed each other, he seemed embarrassed. As if I made him a little self-conscious. As if, also, he had understood that I knew him perfectly.”

To mark his departure last month, City chairman Khaldoon al-Mubarak arranged for the club’s main training pitch to be named after Touré in recognition of contribution to the club. A tiled mural of the midfielder celebrating his winning goal against Stoke City in the 2011 FA Cup final also stands as a permanent memorial, although the man who won seven trophies in his spell in Manchester admitted his memories will always be marred by the circumstances of his departure, Guardian’s Ed Aarons writes.

The veteran midfielder hailed the title-winning season as the “perfect” farewell, but there was a bitter element to his departure and he blames Guardiola for it.

“He was a hypocrite praising me but I let him do it,” Touré explained. “I would have preferred to have no ceremony and leave with my head higher. I have the impression that Pep, without acknowledgment or respect, did everything to spoil my last season. It hurts when you spent eight years in a club. He stole my farewells with City, a club where the fans are beautiful.

I would have liked to leave with emotion of this club as could [Andrés] Iniesta or Buffon. But Pep prevented me. The worst part is that at the end I was happy to leave this club that yet I loved so much. I was frustrated and so I felt neglected, neglected. If I did not shed tears at the time of the goodbyes with the supporters, it’s because there was a break and I could not see this guy anymore.”

Toure further explained that he wants to be the one to peel back Guardiola’s ‘fake’ mask: “Actually, I want to be the one who breaks the Guardiola myth a bit. Barcelona, he did not invent it. He just had the intelligence to adapt what Cruyff had set up. Then at Bayern and City, he tried to regurgitate the same patterns but with this requirement: working with ‘his’ players and with almost unlimited means.

It would not work at Crystal Palace or Watford. For me, Zidane is bigger because he has fewer requirements and shows great respect for all his players. Pep wants to be considered a genius. He loves it. But there is a lot of comedy behind all this, it’s a bit of anything. He puts on an act. When I see him scratching his head in full match to show that he thinks thoroughly, it makes me laugh. It’s comedy.”

Toure made over 300 appearances since joining City from Barca in 2010, scoring 79 times in all competitions. He helped them to three league crowns, two League Cups, an FA Cup and Community Shield.