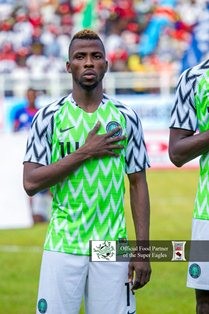 Manchester City are set to earn US$80,087.23 from Kelechi Iheanacho's involvement with the Super Eagles at the 2018 World Cup.
The Nigeria international striker ended his association with The Citizens about a year ago but the Premier League champions will still be compensated by Fifa.
FIFA pay a compensation package of $8,530-per-day for every player released for the tournament, starting two weeks before the opening match until they are they are knocked out of the competition whether or not they participated in the group games.
Manchester City will receive more than one-third of the total amount for Iheanacho making Nigeria's World Cup squad as he was registered with the club July 2016 to August 3, 2017.
The Total per Player is distributed to the club(s) with which the player was registered during the two years before the final competition of the 2018 FIFA World Cup.
Iheanacho's current club, Leicester City, will receive approximately $142,000
Ifeanyi Emmanuel
Source: Allnigeriasoccer.com
Share this: