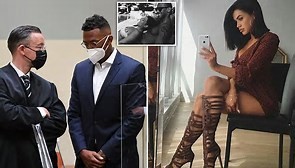 An incident that occurred while the former couple were holidaying in 2018 in the Caribbean, Sahin S the mother of Jeromes twin daughters made the allegation at the court in Munich, she claimed the 2014 world cup winner and former Bayern star, who currently plays for Lyon football club in France, had punched her, pulled her hair, bitten her on the head, throw a lamp and a small cooling box at her.

Jerome Boateng testified for about two hours in court, that he was the victim of his ex aggression, she hit him and injured his lips.

Boateng was convicted of dangerous bodily harm to his ex. The prosecutor Stefanie Eckert called for a suspended 18 months prison sentence and 1.5 million euro fine.