COLIN KAEPERNICK: WITH SIGNINGS OF RACIST RICHIE INCOGNITO & NICK BOSA … EX-QB HAS PROOF HE WAS BLACKBALLED 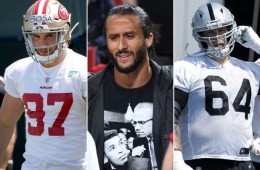 As previously reported, the former quarterback agreed to a settlement with the NFL in his collusion case earlier this year, but he understandably still has grievances with the circumstances that ended his professional playing career.

As noted by Total Pro Sports, “Incognito was part of a bullying scandal with the Dolphins in 2013, arrested just last season for threatening to shoot the employees at a funeral home, and hasn’t played since 2017,” the outlet writes. Because he’s a white male, his sketchy behavior is acceptable compared to kneeling during the National Anthem.

Meanwhile Kaepernick’s Blackballing from the NFL (during the PRIME of his) was for the “crime” of wanting Black folks to stay alive.

⁦@Kaepernick7⁩ can’t get a job but this guy can.
Unbelievable.

2,204 people are talking about this

Kaepernick took to Twitter to shade the league for signing players with controversial  backgrounds such as Incognito and Nick Bosa, when he retweeted a post from L E F T, PhD that criticized teams signing such players.

“The ‘Progressive’ Bay Area NFL teams have opened their arms to MAGA maggot Nick Bosa and Richie ‘I openly call teammates N—er’ Incognito. Meanwhile Kaepernick’s Blackballing from the NFL (during the PRIME of his) was for the ‘crime’ of wanting Black folks to stay alive,” the tweet read.

Bosa, the No. 2 pick this year, deleted his pro-Trump tweets ahead of the draft and one that called Kaepernick a “clown.”

He reached a confidential settlement with the NFL in February reportedly worth less than $10 million for allegedly being blackballed by the league’s owners.