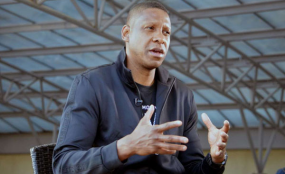 The Toronto Raptors have made history by winning the first NBA championship in their 24-year history, beating the Golden State Warriors, 114-110, in Game 6 of the finals on Thursday night, the Guardian reports.

The team's president, Masai Ujiri, keeps himself out of the limelight but is one of the shrewdest front-office minds in the business of basketball, according to sports site The Undefeated.

The site reports that Ujiri became the first NBA general manager to grow up in Africa when he was hired to run the Denver Nuggets' basketball operations department in 2010.

He was born in Bournemouth, England, but the family moved back to Nigeria when Masai was two. Wikipedia says that Ujiri's father, a hospital administrator and nursing educator, was an Isoko from Aviara in Delta state in Nigeria, while his mother, a doctor, is Kenyan, of the Kamba people from Machakos.

By age 13, he had fallen in love with basketball and left Nigeria for Seattle to play at a prep school while staying with a Nigerian family, according to The Undefeated.

Now, CBS Sports reports that the Washington Wizards are "preparing" a massive $10 million per year offer for Ujiri and are expected to seek permission from Toronto to speak to him about their vacancy.