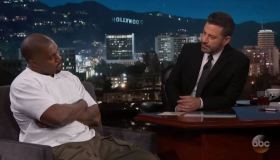 Kanye West made an appearance on Jimmy Kimmel Live, and it was going well, he even cracked a smile or two.

Neither Kimmel nor Ye, seemed to shy away from the questions about Trump with Kanye adamantly declaring that neither “liberals” nor the Black community can bully him into not voicing his support for Trump.

Ye had an answer for literally everything. Until Kimmel stopped with the niceties and went straight for the jugular.

Kimmel interrupted the rapper’s rant about love and said, “I think that’s a beautiful thought but just in literal terms there are families being torn apart at the border of this country … as a result of what this president is doing, and I think that we cannot forget that whether we like his personality or not, his actions are really what matter,” Kimmel said, going straight for the jugular. “You’ve so famously and so powerfully said ‘George Bush doesn’t care about black people,’ it makes me wonder what makes you think that Donald Trump does, or any people at all?”

Suddenly the outspoken, confident, self proclaimed “Yeezus,” didn’t have an answer. He sat there with a blank, priceless expression on his face for a few seconds. Kimmel broke the silence saying, “Why don’t we take a break, we’ll come back,” as the audience awkwardly claps and Kanye breaks into a smile.

After the break the question was not revisited.