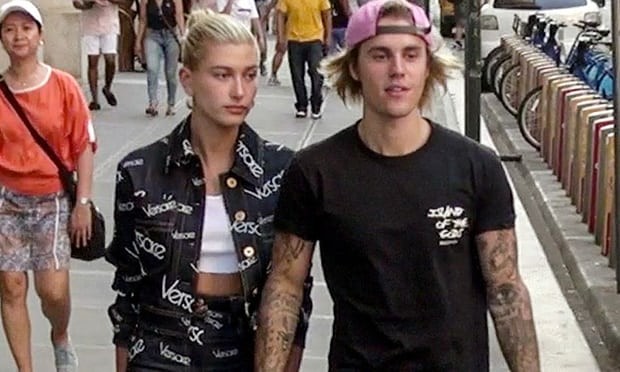 None of his more erratic past behaviour could deflect the legions of True Beliebers from their cause, not his brushes with the law, not his alleged use of racial epithets, not even his at times appalling taste in clothes. But this could: Justin Bieber is reportedly engaged.

TMZ reported that the Canadian superstar asked his on-off partner, the model Hailey Baldwin, to marry him in the Bahamas on Saturday. And she accepted.

In Bieberland it was as though North Korea had finally gone and pressed the nuclear button. Pandemonium. Disbelief. Despair. “I’ve only had our wedding and future planned since I was like 9. You did my dirty @justinbieber,” vented Brooklyn Sciford from Omaha, Nebraska.

“Engaged?? Really???” tweeted Ky. “Did she know ever word to every song? Did she buy purple clothes because he said it was his favorite color?? I did.”

“I’ll be going into hibernation to cry for the rest of my life,” said Brianna Smith from Rushville, Indiana.

Confirmation of the engagement was yet to come from the couple themselves, though CNN said it had also verified it. The pair was introduced by Hailey Baldwin’s father, the actor Stephen Baldwin, at the New York premier of Bieber’s film Never Say Never in 2011 when she was 14 and Bieber 17.

They had a short-lived relationship in 2016, after which Bieber reunited, it now seems temporarily, with the singer-actor Selena Gomez.

The couple’s families sent the internet into overdrive over the weekend with nudge-nudge references on social media. “Proud is an understatement! Excited for the next chapter!,” posted Bieber’s father Jeremy on Instagram along with a photograph of his son at the beach bathed in a golden sunset.

Stephen Baldwin, a Trump supporting born-again Christian who has appeared in movies that include Born on the Fourth of July and The Usual Suspects, posted and then deleted a tweet in which he said “Always pray 4 Gods will !! He is moving in the hearts of JB&HB.”