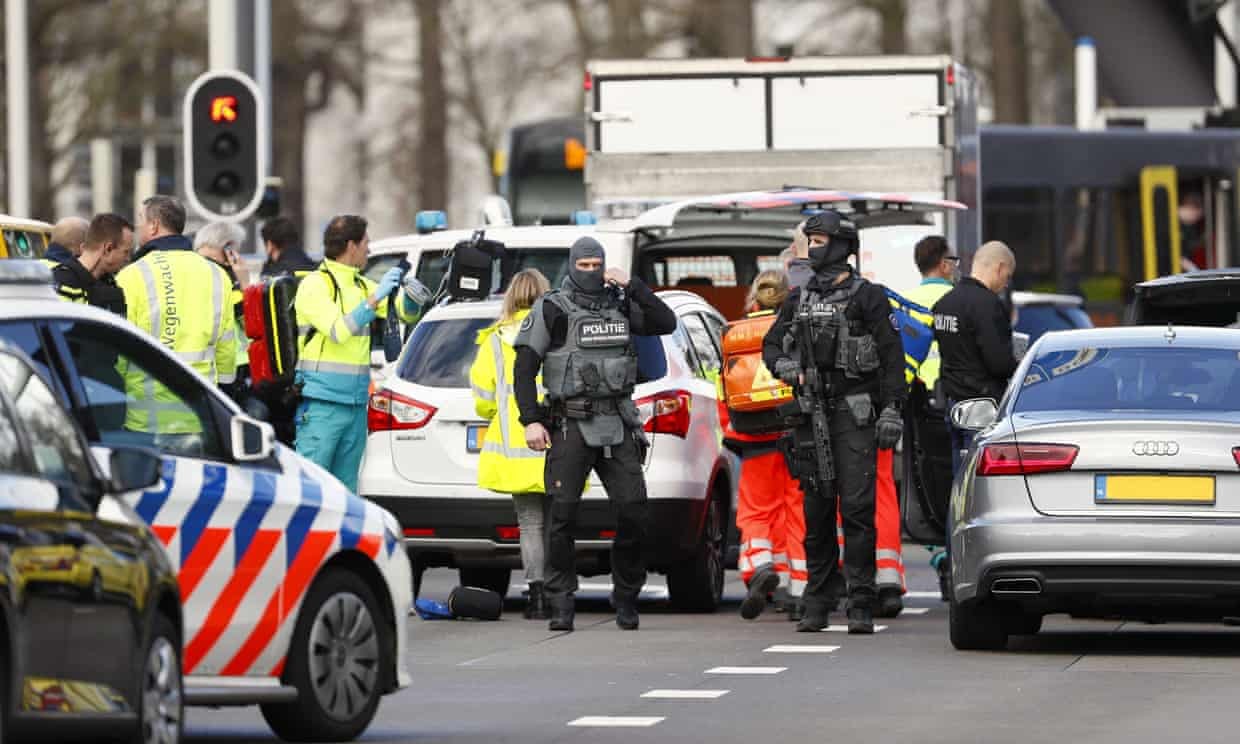 Police have arrested a man suspected of shooting three people dead and injuring five more on a tram in the Dutch city of Utrecht, apparently in a family dispute.

Turkish-born Gökmen Tanis, 37, was detained on a street in the north of the city several hours after the shooting, which happened at 10.45am local time (0945 GMT) on the central 24 Oktoberplein junction. Authorities initially said it could have been a terror attack.

Utrecht, the Netherlands’ fourth-largest city, spent much of the day in lockdown after the incident, with authorities asking residents to stay at home. Students were prevented from leaving schools and colleges, and many shops in the area closed.

A spokesman for the Dutch public prosecutor’s office said investigators were still taking into account the possibility of a terror motive, but added other possible reasons were not being ruled out.

A police spokesman, Bernhard Jens, had earlier said the attack could be a domestic dispute and Turkey’s state-run Anadolu news agency, citing relatives of the Turkish-born suspect’s family, said Tanis had fired at a woman for “family reasons” then shot at others who tried to help her.

The national terrorism coordinator, Pieter-Jaap Aalbersberg, raised the alert level in the province to its maximum. Security was also increased in the nearby cities of Amsterdam, Rotterdam and The Hague as well as at Schiphol airport.

Utrecht police issued a CCTV picture of Tanis, warning people not to approach him but to alert the authorities if they saw him. They also appealed for witness photographs. 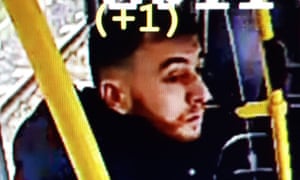 An image released by police of the suspect in the tram shooting. Photograph: Politie Utrecht

Unlike France, Belgium and Germany, the Netherlands has not had a major terror attack in recent years. The Dutch prime minister, Mark Rutte, said the country had been “rocked” by what happened.

A local broadcaster, RTV Utrecht, quoted a witness, Jimmy de Koster, as saying several shots had been fired. De Koster said he had been on his way home from work when he saw a woman lying on the ground next to a tram, shouting: “I have done nothing.”

Another witness, identified only as Niels, who was on the tram, told the Algemeen Dagblad newspaper that the gunman seemed to target one person. “I heard like a bang bang bang in the carriage behind me, and suddenly people were running out for their lives,” the witness said.

“I had the impression he was firing at one person in particular, because I saw a woman crawl out. Other people tried to help her, and when they did that he went round behind her and began firing at them.” 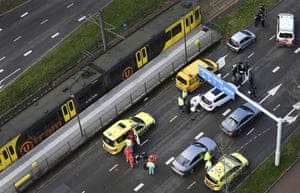 An aerial view of the scene in Utrecht. Photograph: Ricardo Smit/EPA

A third witness, Daan Molenaar, told the national broadcaster NOS he did not believe it was a terrorist attack: “The first thing I thought was, this is some kind of revenge or something, or somebody who’s really mad and grabbed a pistol.”

Several Dutch media outlets reported that Tanis had appeared in court in Utrecht on 4 March charged with rape. RTV Utrecht said the suspect was well known to police for a string of further offences, including threatening to murder a woman and firing a weapon at an apartment block close to the Oktoberplein.

By early evening, Utrecht’s large Holland casino was one of several places to still be closed because of the “crisis situation”. The large plaza outside the concrete brutalist structure was deserted apart from a steady stream of cyclists and cars.

One woman who declined to give her name described the attacks as “unreal. I live there [in the neighbourhood],” she said. “I moved in three weeks ago. It still feels unreal. You can’t really imagine it.”

Tijn Koops, a 20-year-old radiologist, who takes the same tram every day, said the events were disturbing. “It’s pretty unusual. Most shootings happen in Amsterdam.” But it would not change his behaviour, he said. “It makes me worried, but I know it won’t happen again.”

The wounded were taken to Utrecht’s main teaching hospital, where a major incident was declared. Dutch media reported that at least three people received emergency treatment at the scene.

There were initial reports of shootings in other areas of the city but these were subsequently discounted by police. Police said a red Renault Clio was stolen near the Oktoberplein shortly beforehand, and was later found abandoned further to the north.