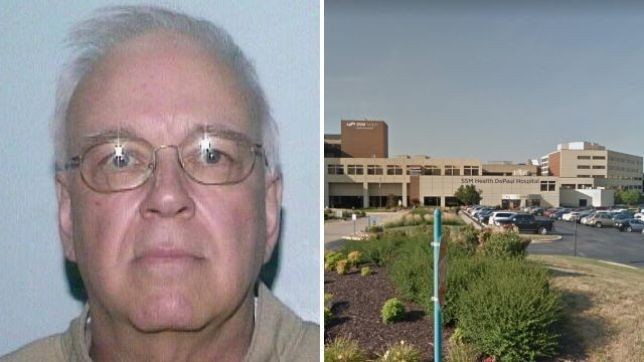 A pedophile Catholic priest made young boys dress up as the Baby Jesus in swaddling clothes then sexually abused them. Frederick Lenczycki, 74, admitted two counts of sodomy Thursday, after a court in St Louis, Missouri, was told how he molested two boys between 1991 and 1994.

One of the victims had his genitals repeatedly grabbed by Lenczycki, while the pervert clergyman kept trying to rip the second one’s clothes off. They were attacked while he was chaplain of St Louis’s DePaul Health Center. Lenczyski, who will be sentenced on August 15, had previously been charged with sexually abusing three other boys in Chicago during the 1980s. Lenczyski admitted his crimes in St Louis County Circuit Court Thursday (Picture: Google Maps) Those youngsters told how the priest, who they knew as Father Fred, would swaddle them in cloths like the Baby Jesus was after being born. He did so under the guise of organizing religious pageants, which never took place, and which were used as a front for the abuse.

Lenczyski admitted that sex abuse in 2004 and was jailed for five years. Randy Kanaday, who is one of the two victims Lenczyski admitted attacking at Thursday’s court hearing, said the pervert’s guilty plea would help put his ordeal behind him. He told the St Louis Post-Dispatch: ‘I am so relieved that justice finally didn’t give up on me. ‘For all those years, people looked the other way, it felt like. And now, finally, something’s being done.’ Church and court files seen by the paper say Lenczyki admitted abusing up to 30 boys across Illinois, Missouri and California over the course of 25 years. David Advocate, from the Survivors Network of those Abused by Priests (SNAP) called on Lenczyki to get the ‘longest possible sentence.’ He said: ‘We remain deeply grateful to and impressed by the two St Louis men who stuck their necks out so that others will not have to worry about Fr Lenczycki being around children or vulnerable adults in the future.’