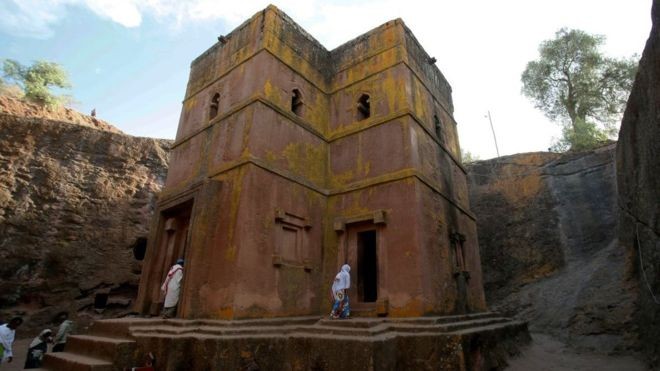 The Toto Tours itinerary includes the ancient churches of Lalibela

Ethiopian church groups have called on the government to block a planned visit to the country by a US-based company that organises tours for gay people.

The groups were particularly angry that the itinerary published by the Toto Tours company includes religious sites.

Many Ethiopians are deeply religious and disapprove of homosexuality, which is also prohibited under the law.

The owner of Toto Tours told the BBC the company had received threats and hate messages on social media.

"We are humble and loving people, we come with no harm in mind, nothing we do is going to harm anybody, and yet we are being threatened with harm," Dan Ware told the BBC Amharic service.

Mr Ware said he was afraid, and urged the Ethiopian tourism ministry "to be careful".

"The eyes of the world will be on us when we come and whatever is done to us will reflect tremendously on the Ethiopian culture and its tourism industry."

The Toto Tours website says it is planning a trip to Ethiopia in October this year. The itinerary includes Bahir Dar, a centre of Christian mysticism, as well as Lalibela, famed for its ancient churches carved out of rock.