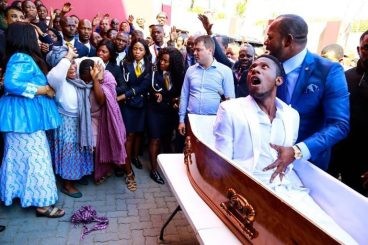 In a shocking development, Brighton Elliot Moyo, the Zimbabwean man who South African Prophet Alph Lukau controversially ‘resurrected’ from the dead back in February, has died again.

Unfortunately for Brighton, Pastor Alph Lukau was not there to facilitate another resurrection. A close family member who spoke to H-Metro says Elliot was buried on Saturday.

The relative said Elliot’s stomach started swelling and didn’t stop for three days and on the third day, he died.

Elliot  is reportedly survived by his wife.