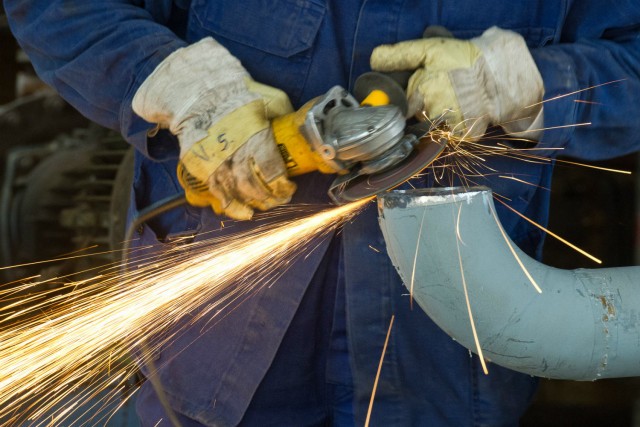 Germany is struggling to fill positions across the board, including in the metal industry. Photo: DPA

The new package of laws aims to attract foreign skilled vocational workers with German language skills, including those from outside the EU, and promises them eased visa procedures and reduced red tape.

They were created last year in a bid to address the shortage of skilled workers in many regions and industries across Germany. The law is aimed at both foreign citizens who have applied for asylum in Germany and to those applying for a work visa.

But the new immigration rules are also being created to be able to deport rejected asylum seekers more easily.

Okay, so what does it mean for workers?

The new law on this part of the measure was passed with a clear majority in the Bundestag, paving the way for qualified workers from non-EU states to come to Germany.

According to government estimates, the new rules will bring an additional 25,000 skilled workers to Germany every year.

As The Local has reported, Germany is desperate to plug the gaps in its worker-starved industries.

One of the most significant changes is getting rid of a rule that requires bosses to prove that neither a German nor an EU citizen could be found to fill a position before it was offered to an immigrant.

The new law is also set to relax restrictions that give preference to foreign workers only filling up so-called "bottleneck occupations” – jobs that have a lot of vacancies – including in the care sector, the IT industry and electrical engineering. This will open up other industries to skilled foreign workers.

Another part of the law is for skilled workers – such as cooks, metallurgy workers, builders or IT technicians – to be able to enter the country for six months in order to look for a job in Germany, provided they can financially support themselves.

When it comes to asylum seekers, the government has previously said it wants to make sure it doesn't deport the wrong people. So asylum seekers who speak German, have no criminal record and have some skills or willingness to learn are more likely to be allowed to stay although that's not guaranteed.

The care sector is another area where Germany is struggling to fill vacancies. Photo: DPA

Deputy SPD faction leader Eva Högl said that the legislative package should send a signal that qualified job seekers from non-EU countries can come to Germany.

However critics, such as in the far-right Alternative for Germany (AfD), said it could increase the risk of people abusing the system to take advantage of benefits.

What about the other part of the laws?

The package of laws includes the "Geordnete-Rückkehr-Gesetz," which roughly translates to Orderly Repatriation or Return Law.

This is intended to make it more difficult for rejected asylum seekers to evade an ordered deportation.

Essentially, the government wants to extend the powers of the police and immigration authorities so that fewer deportations fall through.

Among other things, there will also be sanctions on benefits for rejected asylum seekers.

In future, those awaiting deportation could also be accommodated in regular prisons. Currently they are placed in detention centres.

But the coalition's plan has been met with strong opposition. The Left party called it "unconstitutional."

After a heated debate, a total of 372 members of parliament voted in favour of the coalition's plan and 159 delegates rejected the draft.

A total of 111 Bundestag members abstained. Federal Interior Minister Horst Seehofer of the centre-right Christian Social Union (CSU) said: "An obligation to leave the country must be followed by an actual departure."

Why are these laws controversial?

Immigration has been a polarizing political issue since Germany absorbed more than one million refugees and migrants when Chancellor Angela Merkel of the CDU made the decision to keep the country's borders open in September 2015.

The large influx sparked a xenophobic backlash that saw the anti-immigration and anti-Islam AfD enter parliament in 2017 as the biggest opposition party.

It continues to split opinion in Germany. However, the head of the Confederation of German Employers' Associations, Ingo Kramer, was positive last year when he said that, of those who arrived since 2015, "more than 400,000 are in employment or training... even I am surprised at how quickly it's progressing".