Uganda City On Fire, As Pop Star Politician Is Detained 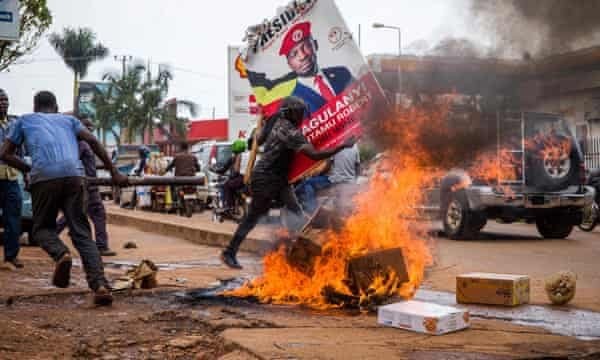 The Security forces in Uganda clash with supporters of Bobi Wine after he was arrested for violating the  rules of Covid-19 before the rally excercise.

Jason Burke Africa correspondent, and Samuel Okiror in Kampala gave this report on Wed 18 Nov 2020,That the Security forces in Uganda has fought running battles with supporters of the popular Ugandan reggae singer and opposition presidential hopeful Bobi Wine after he was arrested for going contrary to Covid-19 regulations before taking a step for rally.

Therefore, Police arrested Bobi Wine, who is seriously struggling with full hope to unseat Uganda’s long-time leader, Yoweri Museveni, in the eastern town of Luuka. Meanwhile,his supporters immediately took to the streets in the centre of Kampala, the capital building barricades and lighting tyres. Protests were reported to be spreading to other cities and towns on Wednesday evening.

In the move of this protest called for the violent clashes,which dozens were reported to have been hit by live rounds fired by police and at least eight persons were killed in the  struggle.

And Bobi Wine, whose real name is Robert Kyagulanyi, said police had violently broken into his vehicle and taken him into custody.“The price for freedom is high but we shall certainly overcome …. Resistance against tyranny is not only a right. It is a DUTY for oppressed people to carry out!” Wine still laments from the tips of tweets after his arrest.