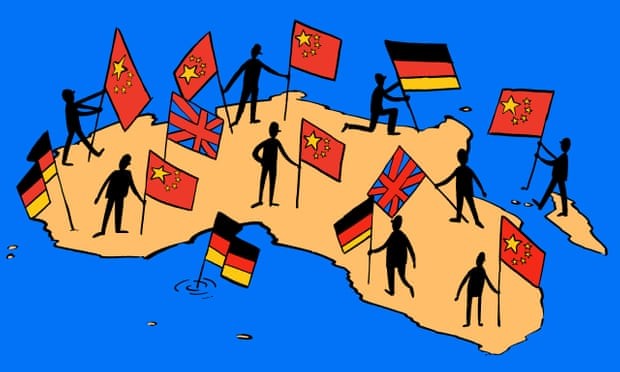 While the British media dined out on Theresa May’s Africa trip last week, Africans are still reeling from the reporting. Sky News captioned Uhuru Kenyatta as “president of Africa”, while the BBC gave the title he should have had, “president of Kenya”, to his rival, Raila Odinga.

There are a million metaphors in Britons declaring an African superstate based in Kenya – who knew our broadcasters were such pan-Africanists? – and declaring an Odinga coup. But the reality is that there is widespread cluelessness in Britain about the political and economic situation across the continent today, and it shows.

The royals have shown more interest in African countries than our elected political leaders have. While we have had to tolerate endless patronising and presumptuous slogans about how African economies will fill the gap left by the EU, it’s worth asking what it is that Britain really has to offer Africa.

The continent’s countries are growing, both in terms of their economies and their population, and – bucking the trend elsewhere in the world – are seeing job creation outstrip demographic growth. Most African economists differ on just how effectively that will translate into prosperity in the coming decades, but they tend to agree on two things. What Africa needs is greater regional integration, and a more intense focus on domestic manufacturing, especially agricultural machinery and goods for domestic consumption – moving away from the old colonial pattern of exporting raw resources and importing food, patterns that hugely benefited the former imperial powers.

Britain is hardly a role model in either respect. It is abandoning the EU, and has never recovered from the long-term decline in its manufacturing. Britain’s economy is based on service industries and consumer debt, a pattern that no one in Africa wants to reproduce, even if – with 40% of the continent’s countries now at high risk of debt distress – it is in significant danger of doing so.

Britain’s approach to Africa contrasts starkly with that of Germany, which is investing in more of the kind of industry African countries actually want. While May was honing her dance moves, Angela Merkel was offering manufacturing plants. The German chancellor, also on a working visit to the continent last week, agreed plans with Ghana – the nation Britain once considered its “model colony” – to establish a Volkswagen assembly plant, adding to the facilities it already has in South Africa, Kenya, Rwanda and Nigeria.

To be fair, Britain is still a major investor in Africa, ranking way ahead of Germany and second only to the US. Both Britain and Germany have terrible colonial records on the African continent. But in Britain’s case, the pattern established in that era is highly relevant today. Post-independence, British policy was overtly geared towards encouraging exports to Africa that benefited the British economy, and definitely not towards helping African nations reduce their dependence on importing British products.

In some cases that’s beginning to change, but Brexit feels like a giant step backwards. The emphasis will now again be on how Britain can use Africa to prop up its own economy. When May announced that the UK will host the 2019 Africa Investment Summit, it’s hard to avoid the perception that Britain wants to increase its visibility relative to China. All eyes are on China because the nation currently exports eight times more goods to Africa than the UK and is the continent’s major investor in infrastructure, albeit with growing concerns about the unsustainable levels of borrowing – “debt trap diplomacy” – that it is creating in the process.

Visibility in Africa is important to Britain because this is still very much a relationship that evolved out of imperial domination. That’s obvious in the political choreography, which is undeniably clumsy and awkward, and, from Boris Johnson in particular, has at times been plain insulting. While China invests in African construction and infrastructure, which is key to real growth here, British investment is still concentrated in extractive natural resources – most of all, energy.

British companies still make an eye-watering amount of money out of these investments while ordinary Africans do very poorly. The cost of living in Africa is higher than comparative economies, and so, as a result, are labour costs, which makes it difficult for African countries to compete at manufacturing with, say, Bangladesh. And while African companies grow faster and are more profitable than their global peers, they struggle to achieve equity with foreign companies: not a single African-owned company is in the Fortune 500.

Africans I talk to are sceptical about grand pronouncements by foreign governments over deepening ties with the continent. It’s hard to ignore the pull of the natural resources that Africa has in such abundance: vanadium, diamonds, phosphates, cobalt, chromium and gold. History shows that extracting them does little to enrich ordinary Africans. What they want are investments that accelerate the growth and innovation African businesses are already pioneering.

If Britain wants to be a friend to Africa, it needs to stop looking to the continent to boost its self-esteem – “the shared history and cultural ties” of which May talks allude to Britain’s imperial domination – and its coffers. African nations have no incentive to deal with nostalgia, particularly when nations such as China, Israel, Turkey and India are competing for access.

And if Britain is interested in Africa, as we are so often told it is, it shouldn’t have to wait for Brexit to ask what it is that African nations actually want, rather than simply presuming they are happy to provide a source of post-Brexit enrichment.

• Afua Hirsch is a Guardian columnist