The Power Of Ethiopia's Gender-balanced Cabinet 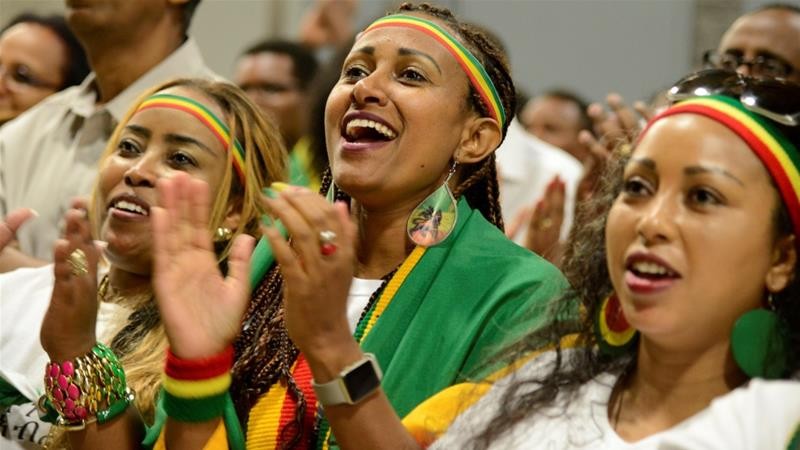 Ethiopia's gender balanced cabinet is sending women around the country a clear message: the patriarchy can be beaten.

Ethiopia's Prime Minister Abiy Ahmed is drawing admiration from all corners for his transformative leadership. Since coming to power six months ago, he has released political prisoners, widened the democratic space, ended the military stalemate with Eritrea, and averted a looming financial crisis. In short, his dynamic leadership, energy, and enthusiasm have pulled off what a Washington Post editorial described as an "astonishing turnaround" for the country.

Ahmed's latest decision to fill 50 percent of his cabinet with female ministers is an integral part of the transformative agenda he has set out during his inaugural speech on April 2. It is easy to dismiss this move as a token gesture or a mere publicity stunt, but in a highly patriarchal society such as Ethiopia where public discourse about gender equality is non-existent or confined to the margins, the mere existence of a gender-balanced cabinet can have a transformative effect.

Ethiopia's prime minister brought youthful vigour and bold confidence to the masculine, patriarchal, and archaic traditions of the Ethiopian state. During his inaugural address, he broke with tradition and acknowledged his mother and wife. Towards the end of his speech, he said, "in a manner that is not customary in this house, ... I would like to politely ask you to thank one Ethiopian mother who ... planted this distant and deep and elaborate vision in me, who raised me, and brought me to fruition." He went on to say that "My mother is counted among the many kind, innocent, and hardworking Ethiopian mothers ... In thanking my mother, I consider it equivalent to extending thanks to all Ethiopian mothers." Given his numerous policy statements and his commitment to liberal ideas of equality, fairness, and representation visible in these policies, there is no reason to believe that these announcements had ulterior motives.

In announcing the line-up of his new cabinet, Prime Minister Ahmed told the Ethiopian Parliament: "Our women ministers will disprove the old aphorism that women can't lead." Contrary to this old aphorism, he argued, women can help fight corruption, reduce inefficiency, and bring accountability and fairness to government - and that is leadership.

Linguists define aphorisms as cultural heritages that capture society's "gravest concerns and strongest commitments". Aphorisms condense within themselves some of the most defining values and perspectives of a given society on a range of social and cultural issues. In Ethiopia, there are a significant number of widely and openly used sexist and dehumanizing expressions that illustrate the place of women in Ethiopian society.

Recent scholarly work that reviewed the representation of woman in Afaan Oromo and Amharic aphorisms, two of the most widely spoken languages in Ethiopia, depict a shocking portrait of a deeply rotten culture that casts women in a degrading and dehumanising light. A widely used Oromo proverb states "A woman can be tall but not knowledgeable". An Amharic proverb stays: "A woman does not know anything, but gives birth to a knowledgeable child."

The patriarchal tradition that establishes the basic background narrative about the place of women in society and the incorrigibly masculine standards that shape our emotional and cognitive structures subordinate women while relentlessly upholding male privilege. Indeed, the entire cognitive, emotional, and linguistic landscape is permeated with languages, ideas, and perceptions that belittle, dehumanise, and marginalise women while at the same time presenting men as capable, competent, credible, authoritative, and knowledgeable.

These unexamined prejudices distort society's perceptions and judgements about women. They enable various forms of violence against women, from domestic violence to sexual harassment, and rape. They impose what Miranda Fricker, presidential professor of philosophy at the City University of New York, calls "pre-emptive silences" that prevent women from having a voice, and from sharing her experiences, rendering her a political subject whose perspectives and experiences are deemed irrelevant to public policy. In Ethiopia, women's knowledge, expertise or opinions are rarely, if at all, solicited, both in private and public realms.

If we are to change these practices, we have to go beyond enshrining principles of equality in the constitution and deal with the structural dimensions of gender inequality that are stubborn, resistant, and unyielding. We must understand how these structural inequalities impede the race for equality by preventing women from entering the race in the first place, let alone win it. We have to acknowledge the invisible brick walls, barriers, debris, and roadblocks a woman must pass through to enter the race.

However, while it is important to understand the basic background narrative and the cultural norms that pre-emptively silence women and deprive them of voice and visibility in the public sphere, it is critical that we also start building pathways through our institutions to genuinely and visibly recognise the contribution of women to society.

That is why these appointments, rather than being token gestures, have a tremendous transformative potential to end Ethiopian women's experience of invisibility and the silencing of their voice and capacity. By intervening in this way, at the highest level, and increasing the visibility of women in public life, these appointments will disrupt Ethiopian society's highly problematic beliefs about women's capacity to lead.

In a culture where gender inequality is so deeply entrenched and public discourse on gender equality is almost non-existent or confined to the margins, these appointments send a powerful message to young girls  that the status quo is not inevitable, that things could be and should be different and that they too, could one day, assume a position of influence, or even become a Minister.