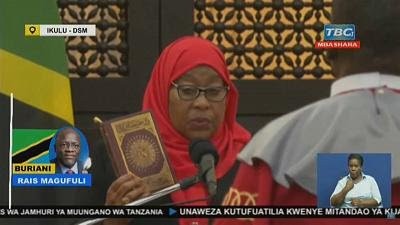 Samia Suluhu Hassan was sworn in on Friday as Tanzania's first female president.

Samia Suluhu Hassan was sworn in as the first Tanzania female president to replace the former President, "Late John Magufuli" who died from heart failure few days ago.
Samia Suhulu, the 61-year-old woman took the oath of office in Dar es Salaam before inspecting troops at a military parade and            receiving a cannon salute.
The inauguration was witnessed by members of the Cabinet and Tanzania's former presidents Ali Hassan Mwinyi, Jakaya Kikwete and Abeid Karume.                                            The former heads of state were the only ones in the room wearing facemasks to protect against COVID-19.
Hassan then went outside to inspect a military guard of honour."I, Samia Suluhu. Hassan, promise to be honest, obey and protect the constitution of Tanzania," she said before a room of dignitaries, who applauded when the brief ceremony was complete.
Under the constitution, Hassan will serve the remainder of Magufuli's second five-year term, which does not expire until 2025.
She promised to serve Tanzania in her best abilities to enhance improvement in every sectors and lift the country to the next level by taking it from the footprint of the late John magufuli.