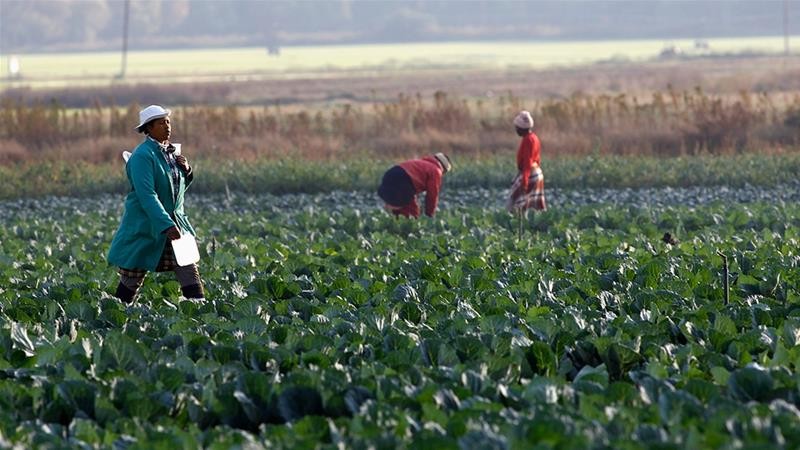 US president criticised after saying Washington will investigate land seizures and the 'large-scale killing' of farmers.

South Africa rejected a tweet by Donald Trump about the country's land reform policy and the "large-scale killing" of farmers saying the US president was "misinformed".

"The presidency has noted Trump's tweet, which is misinformed in our view," President Cyril Ramaphosa's spokeswoman Khusela Diko said on Thursday.

"South Africa totally rejects this narrow perception, which only seeks to divide our nation and reminds us of our colonial past," a tweet by the president's office said.

"South Africa will speed up the pace of land reform in a careful and inclusive manner that does not divide our nation."

Diko said South Africa's foreign minister will ask the US ambassador for clarification.

"The tweet has not determined our approach to the United States on our current relationship and future relationship," communications minister Nomvula Mokonyane told reporters.

Trump's tweet appeared to be a response to a Fox News report that focused on South Africa's land issue and murders of white farmers.

I have asked Secretary of State @SecPompeo to closely study the South Africa land and farm seizures and expropriations and the large scale killing of farmers. "South African Government is now seizing land from white farmers." @TuckerCarlson @FoxNews

Ramaphosa on August 1 announced the ruling African National Congress (ANC) is forging ahead with plans to change the constitution to allow the expropriation of land without compensation.

The plan aims to address racial disparities, as whites still own most of South Africa's land more than two decades after the end of apartheid.

Tembeka Ngcukaitobi, author of The Land is Ours, told Al Jazeera there was consensus in the country that land reform needs to be carried out.

"Donald Trump's comments display his ignorance about South Africa. There is no crisis about land reform. There is a crisis of landlessness. South Africans don't really wish to be lectured or monitored by the head of an imperial superpower," Ngcukaitobi said.

Ramaphosa has said the government's land reform policy will be undertaken in a way that does not threaten food security or economic growth.

South Africa's state-owned Land Bank, however, said on Monday the plan to seize land without compensation could trigger defaults that could cost the government 41 billion rand ($2.8bn), if its rights as a creditor are not protected.

Critics of the land policy say instead of seizing farmland from whites, such households should be given title deeds, turning millions into property owners. They point to the case of neighbouring Zimbabwe, where the economy collapsed after land reform was carried out.

Agriculture accounts for less than three percent of national output but employs about 850,000 people, or five percent of South African's workforce.

South Africa has a long history of colonial conquest and dispossession that pushed the black majority into crowded urban townships and rural reserves.

The 1913 Native Lands Act made it illegal for Africans to acquire land outside of these reserves, which became known as "homelands".

The 17 million people who reside there, a third of the population, are mostly subsistence farmers working tiny plots on communal land.

While blacks account for 80 percent of South Africa's population, the homelands comprise just 13 percent of its land. They are largely controlled by tribal authorities, rather than ordinary residents and farmers.

Since the end of apartheid in 1994, the ANC has followed a "willing-seller, willing-buyer" model, under which the government buys white-owned farms for redistribution to blacks.