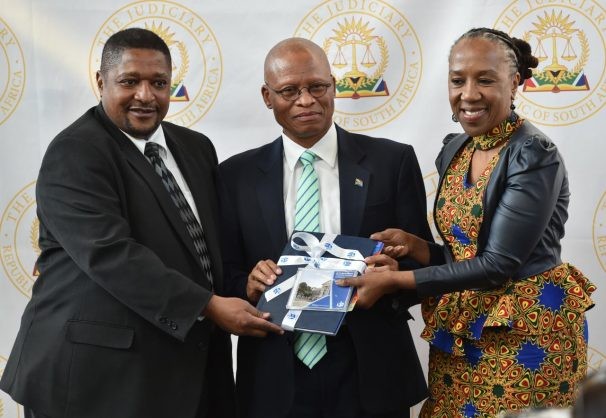 Electoral Commission of SA chairman Glen Mashinini (left) handed over the list of 400 designated MPs and 430 members of provincial legislatures to Chief Justice Mogoeng Mogoeng, who in turn handed it to parliament's acting secretary, Baby Tyawa, at a ceremony held at the Constitutional Court in Braamfontein, 15 May 2019. Photo: Supplied by GCIS.

The challenge to all of us is to stop kowtowing to corrupt leadership, Chief Justice Mogoeng Mogoeng said, adding that injustices are yet to be eliminated.

At least 45 percent of lawmakers in the soon to be installed sixth parliament of South Africa will be women, the Independent Electoral Commission of SA (IEC) said on Wednesday.

IEC chairperson Glen Mashinini handed the list of 400 designated MPs and 430 members of provincial legislatures (MPLs) to Chief Justice Mogoeng Mogoeng in the what was the final IEC requirement after the general elections last week. Mogoeng in turn handed the list to parliament’s acting secretary Baby Tyawa at a ceremony held at the Constitutional Court in Braamfontein.

Mashinini said the female representation was up from 42 percent after the 2014 elections. The legislature with the highest women representation is Mpumalanga, where half of the legislators will be female.

”The provincial legislature with the lowest gender representation is the Western Cape, where just 35.71 percent of representatives are women. The average age of our members of Parliament is 50 years old – the same as the average age in 2014. The oldest member of Parliament will be the leader of the Inkatha Freedom Party, Dr Mangosothu Buthelezi, at 90 years of age. The youngest member of Parliament will be 23-year-old Mr Sibongiseni Ngcobo of the Democratic Alliance,” said Mashinini.

The youngest member of a provincial legislature is 21-year-old Karabo Khakhau. She will represent the Democratic Alliance in the Free State legislature.

Mogoeng urged the members of the new administrations to be ethical and remember that the constitutional goal of eradicating the injustices of the past.

“The challenges in this country has never been more pronounced. I can only plead with those selected to assume the responsibility as MP and MPLs and members of the executive to never forget what we undertook to do in terms of the preamble of our Constitution. We must never forget that right at the top there is ‘we call upon and undertake to recognise the injustices of the past’,” he said.

”Every member of Parliament, the executive, the judiciary, the public and those in the private sector ought to never forget that there were injustices and they are yet to be eliminated. We dare not be defocussed from the primary responsibility of ensuring that people do not continue to swim in the injustices of the past as if all the new phase of South Africa is about is just to cast a vote.”

Power is dangerous, Mogoeng warned, adding that South Africa would not be as it is currently if leaders and civil servants did not break the oath they took.

“Once you have power, it pushes you to want to control everybody as you please. There is a discomfort that comes with seeking to hold people accountable…there are consequences for espousing ethical leadership and for seeking to do it only in terms to the Constitution and the law. The challenge to all of us is to stop kowtowing to corrupt leadership wherever it is to be found…we wouldn’t be where we are right now if everybody did what they took the oath to do…and more importantly, had the public servants and others functionaries in state-owned enterprises been faithful to the undertakings they made to South Africans.”

The chief justice, or any judicial officer designated by him, will administer the oath of office for members of parliament, the president and his deputy. At least 18 parties will represent South Africans in the National Assembly, set to sit for the first time in a week.

The swearing-in is expected to take place next week Wednesday during a sitting of the National Assembly.