Ramaphosa Tells Trump: Keep Your America. Stay Out Of Our Issues 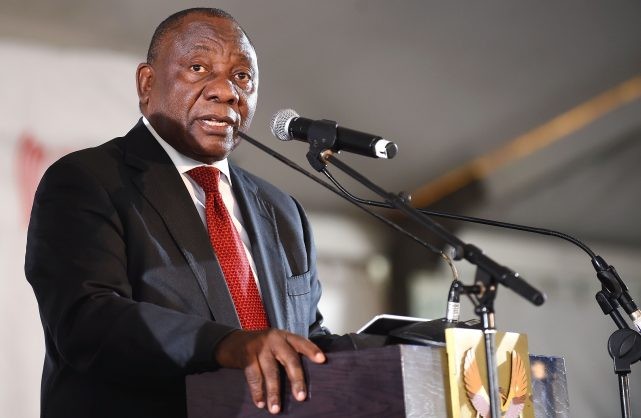 The president has echoed a famous response by Mugabe to Britain in telling the US president to stay in the White House and mind his own business.

In a little-reported-on speech from the weekend, President Cyril Ramaphosa was uncharacteristically aggressive in his response to a tweet from US President Donald Trump on land expropriation in South Africa.

At one point, he even echoed a famous statement by former Zimbabwean leader Robert Mugabe, who once told then British prime minister Tony Blair: “Blair, keep your England and let me keep my Zimbabwe.”

Ramaphosa responded to Trump that South Africa does not belong to him and “he can keep his America; when I meet him I will tell him”.

Trump had earlier tweeted that he wanted his secretary of state to investigate land expropriation without compensation in South Africa after FOX News incorrectly reported that the law had already been changed to allow government to take land from white farmers without compensation and that government was doing so amid the “large-scale killing” of farmers.

I have asked Secretary of State @SecPompeo to closely study the South Africa land and farm seizures and expropriations and the large scale killing of farmers. “South African Government is now seizing land from white farmers.” @TuckerCarlson @FoxNews

Ramaphosa, reportedly addressing a biodiversity conference function in Ha-Matsila village in Limpopo over the weekend said in an SABC News clip: “Donald Trump must leave us alone. When we were facing apartheid, when we were facing oppression … he was not here. He did not fight side by side with us. And we were able, on our own – yes, with support of progressive forces in the world – to resolve the apartheid question.

“As far as I recall, Donald Trump was not around at the negotiating table when we negotiated the end of apartheid. So stick around there in the White House. We will do our business here. And we will find solutions for our problems.

“Trump, stay out of our issues, and we will not get involved in your issues in America.”

The SABC also reported that Ramaphosa said: “I don’t know what Donald Trump has to do with South African land because he has never been here and he must keep his America; we will keep our South Africa; that is what he must do. South Africa is our land.

“South Africa belongs to all the people who live here in South Africa, it does not belong to Donald Trump; he can keep his America, when I meet him I will tell him.”

Meanwhile, British Prime Minister on Tuesday, during her visit to South Africa, said that she backed Ramaphosa on the land issue after he assured her in a meeting that the ANC’s policy on land expropriation without compensation would not result in a “smash and grab.”

May added that her government has supported land reform for some time, as long as it’s “legal.”

South Africa’s department of international relations has meanwhile also asked to meet with US officials to discuss the matter.

Watch the full video below.