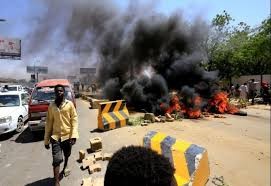 Khartoum - Sudanese protesters poured into the main streets of Khartoum on Monday to intensify pressure on the transitional military council to set up a civilian government.

Police and soldiers responded by using tear gas and batons on hundreds of demonstrators who had set on fire tyres in Khartoum's northern Bahri neighbourhood, according to a dpa reporter on the scene.

"We have been chased by riot police ... who used tear gas and batons to disperse us ... Now we are regrouping to continue the protests until we get what we want," Nasr Eddin, a 28-year-old protester, told dpa.

The renewed protests come after the Sudanese Professionals Association (SPA), one of the main opposition forces, Sunday called for an escalation of pressure on the interim military government.

Security forces had tried to disband a peaceful sit-in outside the army headquarters, which has been in process since earlier this year and was one of the main protests leading to the ousting of long-time president Omar al-Bashir, according to the SPA.

The military council however denied it tried to stop the sit-in.

"We assure all citizens and sit-inners in particular that this claim is completely false," the council said in a statement.

Earlier this month, the transitional military council and opposition groups were unable to agree on the structure and tasks of a joint council they formed in late April to solve their disagreements.

Anti-government demonstrations began late last year with the call for al-Bashir to go. The protesters got their wish on April 11, when the military deposed and arrested him.

But participants say the new military rulers are a continuation of al-Bashir's former regime and have clamoured for more concessions.