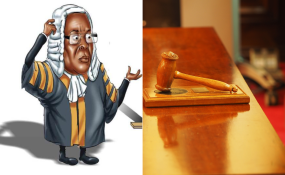 The Court of Appeal has rejected a request by suspended Chief Justice of Nigeria, Walter Onnoghen, seeking to stop his trial at the Code of Conduct Tribunal. Onnoghen was suspended last week by President Muhammadu Buhari pending the determination of his trial at the tribunal. He is accused of falsely declaring his assets.

The Code of Conduct Tribunal (CCT) has expressed its intention to resume the trial of the Chief Justice of Nigeria (CJN), Justice Walter Onnoghen over alleged non-declaration of assets.

This followed the ruling of the Court of Appeal in Abuja yesterday refusing the application by the embattled CJN seeking to stay the proceedings of the tribunal.

The spokesperson of the CCT, Ibraheem Al-Hassan, told our reporter yesterday that the chairman of the tribunal, Danladi Umar was aware of the decision of the appellate court which meant that the tribunal could continue with the trial.

He, however, said as at yesterday, the tribunal was yet to fix a new date for the trial to continue, adding that the decision would be made soon and properly communicated to all the parties involved.

Justice Onnoghen, who is facing six-count allegations of non-declaration of assets, had brought the application seeking a stay of proceedings of the tribunal pending the determination of the substantive appeal before the appellate court.

In a unanimous decision, a three-member panel of justices held that the proceedings of the CCT cannot ordinarily be stayed, citing the decision of the Supreme Court in Saraki vs the Federal Republic of Nigeria, 2017.

The panel said that the Supreme Court in its ruling noted that the CCT, being established by Paragraph 15(1) of Part 1 of the 5th Schedule of the 1999 Constitution, is a peculiar tribunal with quasi-criminal jurisdiction, which proceeding cannot be stayed.

In the lead ruling, the presiding judge, Justice Abdul Aboki held that Section 306 of Administration of Criminal Justice Administration (ACJA) provides that stay of proceedings shall not be entertained in criminal matters.

The appellate court held that its decision to order status quo in the matter on January 24 was temporary since it's has assumed jurisdiction in the matter.

"Our notion of justice is justice according to law and not justice that is tailored to sentiments, whims, and caprices of individuals," the panel held.

"The aim of stay of proceeding is to protect the res (subject matter); to avoid a situation where the res is wrecked before the appellate court can exercise its jurisdiction. Stay of proceeding is a matter of law and facts and the law must provide for it and the applicant must satisfy the court that the proceeding must not be allowed to continue in the interest of justice."

A defence lawyer in the matter, who pleaded anonymity because he is not authorized by the lead counsel, said the defence would be interested to appeal the ruling of the Court of Appeal at the Supreme Court but may not due to some legal requirement.

The matter has been fixed for hearing on February 4.