Nigeria Postpones Election Just Hours Before Polls Due To Open 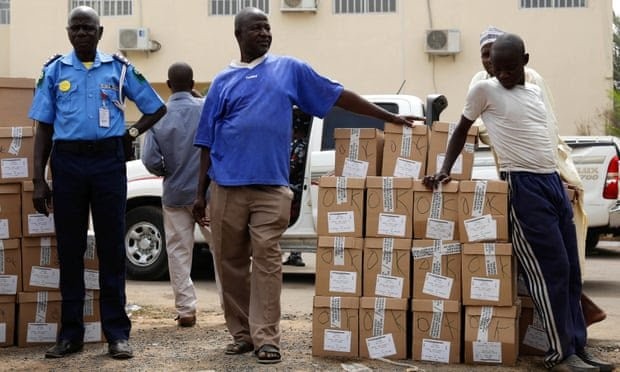 Nigeria’s electoral commission has delayed the presidential election until 23 February, making the announcement just five hours before polls were set to open Saturday.

It cited unspecified “challenges” amid reports that voting materials had not been delivered to all parts of the country.

“This was a difficult decision to take but necessary for successful delivery of the elections and the consolidation of our democracy,” commission chairman Mahmood Yakubu told reporters in the capital, Abuja. He said more details would be released on Saturday afternoon.

The election has been seen as a referendum on Buhari’s first term, which has been marred by his prolonged absence due to illness, a weak economy, and the government’s failure to effectively tackle corruption and insecurity.

The country’s presidential elections in 2011 and 2015 were also delayed over logistics and security issues.

The decision to delay this year’s vote was criticised by the chairman of the main opposition People’s Democratic Party, Uche Secondus, said the move was an action that was “dangerous to our democracy and unacceptable”, adding that it was part of an attempt by Buhari to “cling on to power even when it’s obvious to him that Nigerians want him out”.

Buhari “cooperated fully with INEC by ensuring everything it demanded to conduct free and fair elections were promptly made available,” it said in a statement. “This news is therefore a huge disappointment to us.”

Prior to the announcement

An electoral commission official said that “some result sheets and some ballot papers are reportedly missing. We want to track every (piece of) sensitive material, take inventory of what we have and what is missing”.

A government official said: “The legitimacy of the entire process will be questioned and the winner could lack the moral authority to superintend the affairs of the state.”

In the lead up to the election Nigeria has been dealing with pockets of instability. Authorities bolstered security in much of the country on the eve of the vote, after past elections were marred by violence, voter intimidation and ballot rigging.

A faction of Boko Haram attacked a state governor’s convoy on Tuesday, killing four people and stealing vehicles. Elsewhere, 15 people were crushed to death at a ruling party rally in eastern Port Harcourt. On Thursday, 14 sacks of ballot papers were intercepted in Kano state – though police said they were merely “specimen” papers to educate voters.

As Nigerians prepared to cast their votes, data analysts raised concerns about the number of new voters registered since January 2018, which they said increased by almost exactly the same percentage in each of the country’s states, and suggested that the election results could be open to mass rigging.

Plotted on a scatter line graph, there was a 0.99 correlation across all the states, without a single outlier. According to three separate data analysts, the parity cannot be a coincidence, and two of them called it a “statistical impossibility”.

“Only God works that closely,” one said.

But other observers said there were other possible explanations for the correlation, including demographics.

If some of the new voters registered are fake, it could imply meddling at the electoral commission, though it is unclear whether it would be the ruling party or the opposition that would stand to benefit.

Additional data seen by the Guardian shows irregularities in registration for the 2015 election in which Buhari came to power, until now considered to have been free and fair.