Germany Set To Extend Coronavirus Restrictions Until Early May 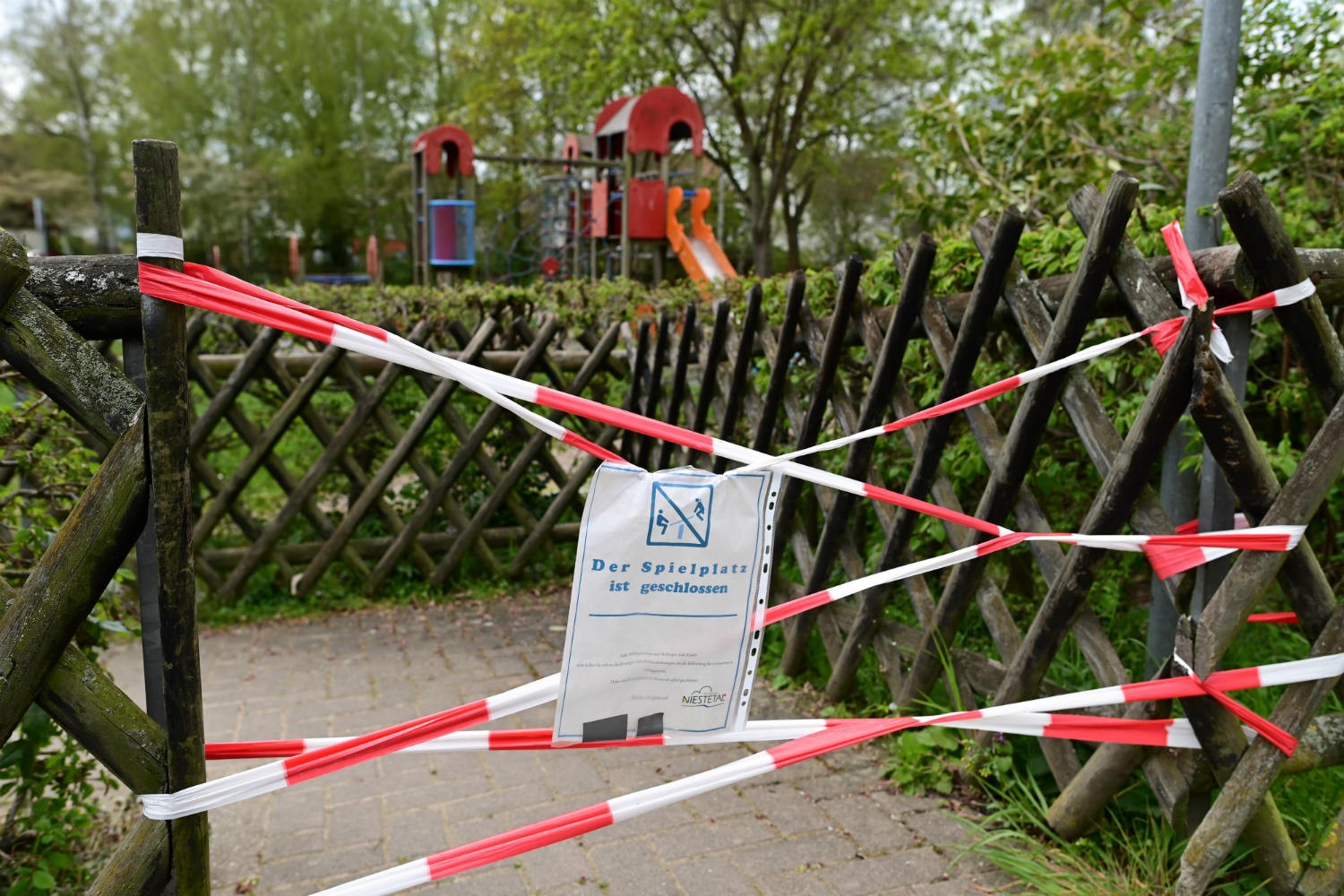 Playgrounds are closed in Germany to limit the spread of coronavirus. Photo: DPA

According to a draft paper, the federal government plans to ease the current lockdown slowly but extend social distancing measures until at least May 3rd.

Chancellor Angela Merkel was set to hold a series of video conferences on Wednesday with cabinet ministers and with the leaders of Germany’s 16 states.

The politicians are discussing how and when Germany can ease measures put in place to stall the spread of coronavirus.

According to a draft document, the government wants to see a coordinated approach across states.

The government wants to allow car dealers, bicycle shops and bookstores to reopen, as part of the first phase of easing restrictions from April 20th.

Meanwhile, shops with under 800 metres of retail space would also be allowed to reopen. Strict conditions would have to be in place in all businesses regarding hygiene, access and queue control.

However, the general 'ban on contact' restrictions put in place to stall the spread of coronavirus, are likely to be extended up to and including May 3rd.

Libraries and culture spots to reopen

Under the same conditions as shops, cultural institutions such as libraries and archives, as well as zoos and botanical gardens, should also be allowed to reopen, the draft plan says.

Other businesses like hairdressers could reopen on May 4th under plans, but business owners would need to prepare and have protective equipment. Restaurants, bars and pubs are to remain closed as before, according to plans.

Religious meetings, celebrations and events will not be allowed for the time being under government plans. Hotels should continue to be "available only for necessary and non-tourist purposes".

Exams and exam preparation for pupils should be able to take place again – but only after appropriate preparations, the paper continues.

Emergency care in day-care centres (Kitas) will be continued and extended. This should enable more parents in essential sectors to work.

By April 29th, the Conference of Education Ministers is to present a concept for further steps on how teaching can be resumed under special hygiene and protective measures.

When it comes to football, so-called Bundesliga "ghost games"  – matches without a crowd – should be allowed to go ahead, but fitness clubs and gyms will have to remain closed, according to initial discussions.

Politicians are still debating whether protective face masks should be mandatory in public areas, such as on transport or supermarkets.

Meanwhile, border controls put in place to fight the coronavirus spread are to remain in place for another 20 days according to the Interior Ministry.

The current measures, which include a ban on gatherings of more than two people in public as well as the closure of schools and non-essential businesses, have brought public life to a near standstill are in place officially until April 19th.

But as the number of new coronavirus infections falls, Germany has been looking to the future and the path back to some kind of normality.

On Monday April 13th, Germany's Academy of Sciences Leopoldina recommended a gradual relaxing of restrictions in stages if new coronavirus infections stabilise at a low level and personal hygiene measures to avoid the spread of the coronavirus are maintained.

Ahead of the talks, Merkel spokesman Steffen Seibert dampened hopes for a swift end to the crippling restrictions that have plunged Europe's biggest economy into a recession.

"The path we have to tread in the coming weeks is a narrow one between cautiously gradually easing measures and maintaining progress in the fight against the pandemic," said Seibert.

Germany's disease control chief said Tuesday that numbers of new infections have "stabilised at a relatively high level", with "no clear sign at present at they're falling".

While the trend was heading in a positive direction, Lothar Wieler of the Robert Koch Institute (RKI) warned that it was not yet possible to say that the disease been contained.

As of Wednesday morning, April 15th, there were more than 132,000 confirmed coronavirus cases in Germany, according to Johns Hopkins University figures.

Of the total, around 68,800 people have reported themselves to have fully recovered from the virus while more than 3,400 people have died.

The Robert Koch Institute (RKI) also reported the largest number of recoveries so far, or 4,500 since the previous day.

The group of researchers behind the Leopoldina report say that "criteria and strategies for a gradual return to normality" should be developed.