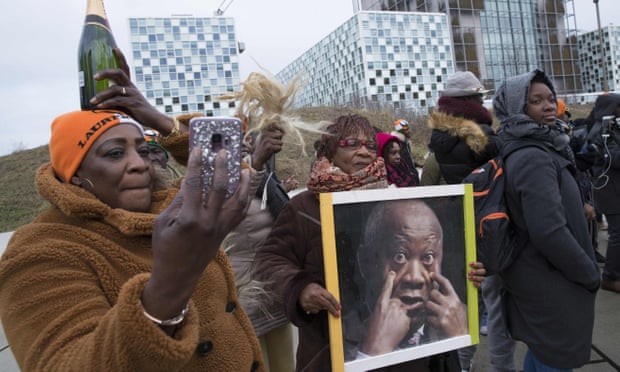 Supporters of Laurent Gbagbo rally outside the international criminal court in The Hague on Tuesday.

Judge orders release of Gbagbo, who had been charged with crimes against humanity

Laurent Gbagbo, the former president of the Ivory Coast, has been acquitted of crimes against humanity charges by judges at the international criminal court (ICC) in The Hague.

In a stunning blow to prosecutors, the presiding judge, Cuno Tarfusser, said they had failed to prove their case and that 73-year-old Gbagbo and his co-defendant, Charles Blé Goudé, a close ally and former political youth leader, should be freed.

The charges related to an alleged campaign of violence launched by Gbagbo after his defeat by Alassane Ouattara in elections in 2010. About 3,000 people died during the unrest.

Gbagbo, who had refused to give up power, was eventually run to ground in a basement after French troops and the UN moved to end the conflict. He was brought to The Hague in November 2011. In 2016 he denied four counts of crimes against humanity, including ordering murder and gang rape.

Tarfusser said on Tuesday a majority of the three-judge chamber had ruled that “the prosecutor has failed to satisfy the burden of proof” against both men.

Lawyers for Gbagbo and Blé Goudé asked judges last year to acquit both men for lack of evidence at the end of the prosecution case in the trial that began just under three years ago.

A former university professor turned activist, Gbagbo spent much of the 1980s in exile in France. After returning, he lost the 1990 presidential vote and spent six months in prison in 1992 for his role in student protests.

He came to power in 2000 in a flawed vote that he himself described as “calamitous”, but he then put off holding another election for a decade. In the 2010 race, Gbagbo came top in the first round with 38% of the vote before losing to Ouattara in the runoff.

Ouattara, who was re-elected in 2015, has been accused by his opponents of using the ICC to silence opposition.