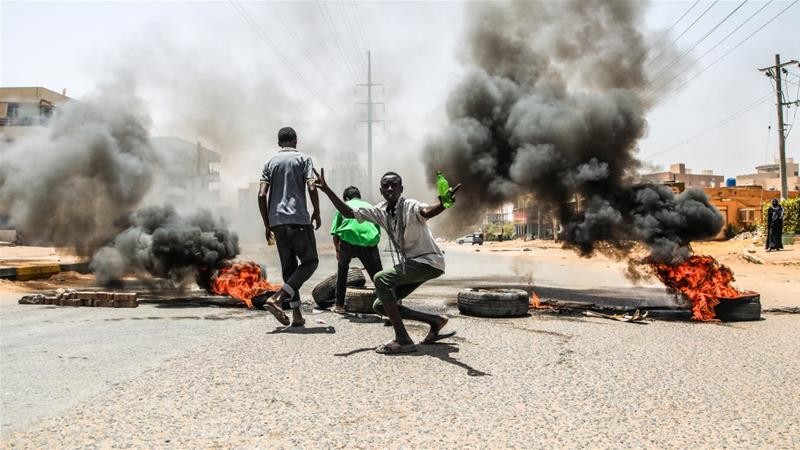 Announcement comes after dozens of demonstrators were shot in the violent dispersal of a sit-in on Monday.

The African Union (AU) has suspended Sudan's membership days after the military launched a brutal crackdown on protesters that killed dozens of people.

The AU's Peace and Security Department said in a post on Twitter on Thursday that Sudan's participation in all AU activities would be suspended with immediate effect - "until the effective establishment of a civilian-led transitional authority," which it described as the only way to "exit from the current crisis".

The announcement followed an emergency meeting by the AU in Addis Ababa, Ethiopia, after the violent dispersal of a protest camp in the Sudanese capital, Khartoum, began on Monday.

At least 108 people have been killed and more than 500 wounded, according to the Central Committee of Sudanese Doctors (CCSD), while a health ministry official was quoted as saying the death toll stood at 61.

Al Jazeera is unable to independently confirm the differing tolls after its journalists were ordered not to report from the country.

Sudan's pro-democracy leaders have vowed to continue their campaign of civil disobedience until the Transitional Military Council (TMC) - which has ruled Sudan since longtime leader Omar al-Bashir was overthrown in a coup in April - is removed and killers of protesters are brought to justice.

The Sudanese Professionals Association on Thursday asked people to block main roads and bridges to "paralyse public life" across the country in retaliation for the military crackdown.

The #AU Peace and Security Council has with immediate effect suspended the participation of the Republic of #Sudan in all #AUactivities until the effective establishment of a Civilian-led Transitional Authority, as the only way to allow the Sudan to exit from the current crisis pic.twitter.com/ioBlnfnxcl

In response to the killings, AU Commission Chairman Moussa Faki Mahamat on Monday called for an "immediate and transparent investigation in order to hold all those responsible accountable".

The AU had earlier warned of suspension if Sudan's military did not hand over power, but extended the deadline on Saturday after the previous one was ignored.

The AU has met some criticism over its response to the crisis. Political analyst Joseph Ochieno told Al Jazeera before the suspension announcement that the emergency meeting was "coming rather late".

The CCSD said 40 bodies were pulled from the Nile River on Tuesday and taken to an unknown location by the paramilitary Rapid Support Forces (RSF). The TMC has not commented on the allegations.

The raid on Monday marked a pivotal moment in the weeks-long struggle between the powerful TMC and opposition groups over who should lead Sudan's transition to democracy.

General Abdel Fattah al-Burhan, the head of the TMC, said it was ready to resume negotiations with the opposition coalition.

But the opposition rejected the offer, saying the military could not be trusted.

Speaking about the TMC's hard line approach, Ochieno told Al Jazeera it was unclear what the ruling generals were trying to achieve with their violent response.

"If it is a way to negotiate … in this day and age, it is rather unusual," said Ochieno. "If part of their trips to Saudi Arabia and Egypt were to show power and intimidate the opposition, they have actually galvanised the entire of Sudan," he said.

"Some of these guys have extensions to the genocide in Darfur. They thought perhaps the old system of general intimidation and use of excess power and violence - to which they subjected the people of Sudan elsewhere - could be attempted in the streets of Khartoum in broad daylight."

The RSF, accused of dispersing the protest camp with gunfire, grew out of the Janjaweed militia that human rights groups accuse of committing war crimes - including killings, rape and torture of civilians - in Sudan's western region of Darfur after the outbreak of conflict there in 2003.

On Thursday, the United Nations pulled all non-critical members of staff from Sudan amid concerns over the violence.

The United States has called on Sudan's military rulers to "desist from violence" and urged talks with protesters to resume.