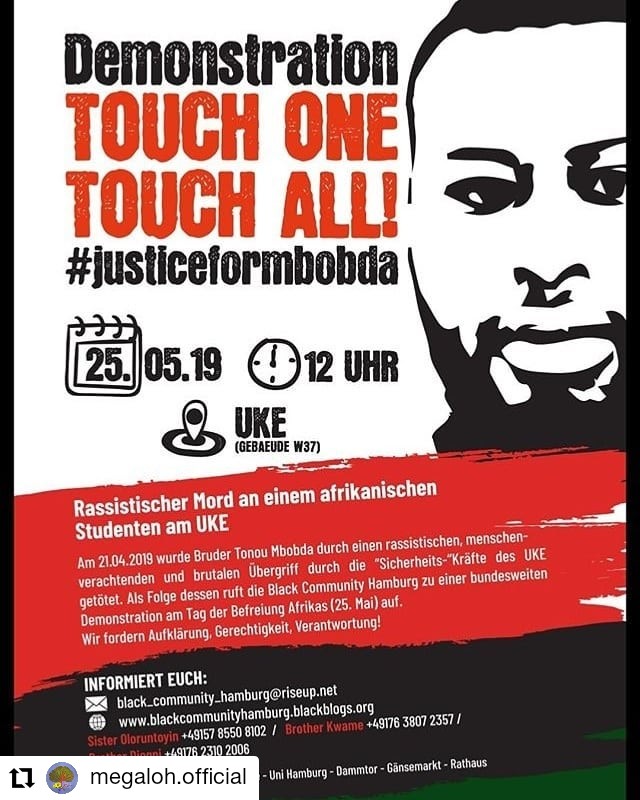 Tonou-Mbobda was mercilessly bruised, beaten and suffocated to death by security guards at the University Clinic of Hamburg on Sunday the 21st of April 2019. The brutal killing of late Tonou Mbobda by UKE security guards was apparently motivated by anti-Black racism, and of course by the rising of nationalists and right wing movement. In fact, some people said that the security guards who brutalized our Comrade to death are known to be right-wing.

The racist attacks by right wing extremists in Germany and Europe is at its peak and might continue to rise, if nothing is done, because the perpetrators of racist attacks feel explicitly legitimate to attack Blacks, PoC, refugees and immigrants, because they scarcely convicted for their brutal acts.

We want to recall your attention to series of racist attacks by German police which eventually lead to the death of Oury Jalloh (2005), Yaya Jabbi (2016), Laya-Alama Condé (2005), Achidi John (2001), Christie Schwundeck (2011) and others of which the perpetrators were not convicted and the victims and their families did not get justice until today.

Lampedusa in Hamburg, Cameroonian Community, Friends of Tonou-Mbobda, The Black Community in Hamburg, Asmaras World and the group Kan Kilin are using this medium to invite all civil society in Hamburg and beyond to join our demonstration. We will march to demand justice and accountability for the perpetrators of the death of Comrade Tonou-Mbobda and others, investigation and record on how mental-ill patients are treated in the UKE and other hospitals, implementation of anti-racist curse/orientation for all police officers, security guards, social workers, teachers, doctors and all public workers.