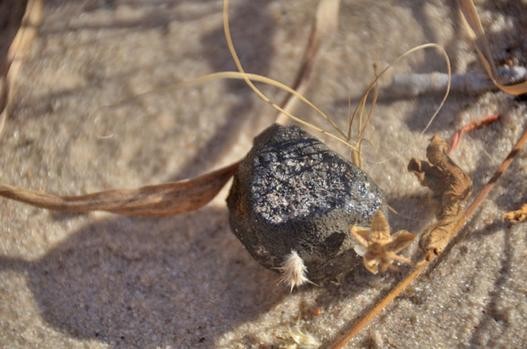 A meteorite has been recovered from a remote area of Botswana. The event is one of a kind as the meteor was identified before entering the atmosphere, and its fall and retrieval documented. It’s only the second time this has happened. The Conversation Africa’s Moina Spooner spoke to Fulvio Franchi and Alexander Proyer about their mission to retrieve the meteorite and why it matters.
Why is the find in Botswana such a big deal?
Alexander Proyer: Meteorites are fragments of asteroids or comets fallen on the surface of earth. Finding a fresh one is rare but what makes this case really sensational, is not the fall itself but the fact that we knew it was coming. Usually, people are taken by surprise, seeing a flash of light or fireball when the asteroid enters the atmosphere. But this one was observed in space, eight hours before it collided with Earth.
The asteroid was first detected by a network of observatories – the NASA’s Planetary Defence network – that search the night-sky for so-called ‘near-earth objects’. In this case, it was Richard Kowalski of the Catalina Sky Survey in Arizona, who discovered the extremely dim light of a moving object out in space.
This was only the third time in history that such an early observation and prediction was possible and only the second time a fragment was recovered. The first find was from an asteroid called TC3 in Sudan.
Fulvio Franchi: We can consider this event as a free-of-charge delivery of material from space that would otherwise require a highly expensive space mission to recover.
Most meteorites are extremely old rocks, dating back to the birth of the solar system about 4.56 billion years ago, and originate from the asteroid belt – objects small and large that consist of stone, metal and carbon, which orbit in the space between Mars and Jupiter. These asteroids keep a “record” of planet-forming processes – like growth by gravitational attraction, heating and melting – a record that is no longer available on Earth because it was overprinted by the tectonic processes operating on our home planet.
Other meteorites are fragments from our Moon or from Mars, that were catapulted into space by major impact events. They are even rarer than regular asteroids. One can appreciate the value of these asteroids by just considering the costs of a space mission to the Moon, Mars or even the asteroid belt, to obtain such samples. This find is a real gift for the international consortium, currently forming to perform laboratory analyses of this and other fragments still to be found during the continuing search.
What happened after it was first detected?
Alexander Proyer: After Kowalski in Arizona saw it, he alerted other institutions, that are part of NASA’s Planetary Defense network, and they worked out the size and trajectory of the body, concluding that an asteroid 2-3 meters in diameter was about to hit Earth – in Botswana.
Fulvio Franchi: Colleagues from South Africa and Finland then contacted us, providing precious information for localising the fragments. We immediately realised the importance of this event and mobilised the first search team.

The fragments of the asteroid 2018 LA – as it’s called – had scattered over a wide area in Botswana’s Central Kalahari Game Reserve, blown by the wind while falling down. Detailed calculations, by two independent groups, of the strewn field allowed our group of researchers to eventually find a fragment of the asteroid.
What was the procedure for its retrieval and what were the challenges you faced?
Fulvio Franchi: There were a few factors to take into account when retrieving this meteorite in Botswana.
Firstly, you cannot just pick up a meteorite and own it –- at least not legally. Meteorites are considered relics by law and are to be handed over to the National Museum.
Secondly, the predicted fall area was in a National Park, the Central Kalahari Game Reserve. This required permits to enter as well as to work there.
Thirdly, the Botswana Geoscience Institute is the one mandated to act when unusual events like this happen. Naturally it’s been involved in the search.
The main technical challenges were to narrow down the search area. This was done by using eye-witness observations and video material, mainly from security cameras. Information on changes in direction and strength of winds, all the way from 27km above ground – where the meteorite exploded – to near-surface, was crucial.
The final challenge was going off-road, deep into the bush, walking for days in the territory of lions and elephants, snakes and scorpions. We had Park Rangers with rifles walking and camping with us, and fortunately, the only casualties were a number of tyres being blown. An unexpected challenge was to have millions of other objects looking similar to a typically dark meteorite at first sight: pieces of burnt wood (from bushfires) or animal dung. But the excitement of finding something of scientific interest, and the joy of adventure, kept us going.
Why is it important to study the meteorite?
Alexander Proyer: There are various, important reasons.
Each meteorite is a piece of the puzzle to understanding our solar system. The asteroids they are coming from represent different stages from dust to small bodies to planetesimals (small planets), that never made it to the final stage of a single planet. One could say that different stages towards the formation of full planets are preserved.
Some of them were shattered again by collision with other asteroids and now expose their interiors. Samples from such depths are unobtainable on Earth or any other intact planet. They are absolutely unique and help us understand the interior workings of Earth and other planets, which were built from very similar materials but are now strongly differentiated into a core, mantle and crust.
In terms of planetary defence, we now have a second case of remote observation of an asteroid linked to recovered material of it. If we ever need to defend ourselves against bigger asteroids in the future, it is vital to know what type of asteroid is coming in and its likelihood of disintegrating, at least partly, in the atmosphere or by being hit by of a defence-missile. By studying meteorites from asteroid 2018 LA it will be possible to link laboratory-determined meteorite properties to asteroid pre-impact remote observations.
Fulvio Franchi: More detailed analyses, looking at the chemical composition of the rock and at the possible content of organic molecules, will also give us clues as to how life on earth was formed and, eventually, on the big question: is there any life out there?
Source: www.iol.co.za