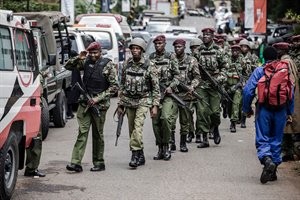 President Kenyatta says authorities will "pursue relentlessly" those allegedly involved in the funding, planning and execution of Tuesday's attack on a hotel complex in the capital.

Kenyatta said in a televised address on Wednesday that "multiple security efforts are underway to detect, deter, disrupt and defeat any terrorist operative or group."

He said over 700 people have been evacuated to safety by rescue teams.

President Kenyatta has said that more than 700 people were evacuated during the security operation and he urged Kenyans to "go back to work without fear," saying the east African country is safe for citizens and visitors.

Hours before Kenyatta spoke, sporadic gunfire could be heard from the scene after scores of people were rescued at daybreak during what police called a mopping-up exercise.

The attack involved at least four armed men who invaded the hotel and shops. - Associated Press

Kenyan President Uhuru Kenyatta says 14 people were killed in Tuesday's attack on a hotel complex in the capital and he declared the operation to neutralise the attackers is over.

Kenyatta did not say on Wednesday how many attackers were involved.

He urged Kenyans to "go back to work without fear", saying the east African country is safe for citizens and visitors.

Al-Shabaab - the Somalia-based Islamic extremist group that is allied to al-Qaeda — claimed responsibility for the carnage at the hotel complex, which includes bars, restaurants, offices and banks and is in Nairobi's well-to-do Westlands neighbourhood. - Associated Press

09:59President Uhuru Kenyatta has said that a siege by suspected militants in Nairobi is over and all the attackers have been "eliminated". BBC

09:41Continued bursts of gunfire are heard from the hotel complex as Kenyan authorities continue to secure the scene of the attack. Associated Press

An injured member of the Kenyan special forces has been taken from the scene of Tuesday's attack in an ambulance.

An Associated Press journalist saw a member of the elite unit known as RECCE Squad being taken out of the hotel complex on Wednesday before he was put into an ambulance.

Kenyan police said early on Wednesday there was still an active security operation ongoing after they announced overnight that all buildings in the hotel complex had been secured.

Sporadic gunfire still rang out through the morning. CCTV footage owned by local media in Kenya purports to show at least four gunmen storming the hotel complex on Tuesday afternoon.

At least 15 people have been killed in the attack claimed by the Somali Islamic extremist group al-Shabaab. - Associated Press

09:11Kenyan Security Forces arrive to the scene of the on-going terrorist attack at a hotel complex in Nairobi's Westlands suburb on Wednesday. (Picture: AFP) 09:09A woman is rescued at the scene of the on-going terrorist attack at a hotel complex in Nairobi's Westlands suburb on Wednesday. (Picture: AFP) Al-Shabaab — the Somalia-based extremist group that is allied to al-Qaeda — claimed responsibility for the carnage at the hotel complex, which includes bars, restaurants, offices and banks and is in Nairobi's well-to-do Westlands neighborhood.

Kenyan President Uhuru Kenyatta is expected to address the nation this morning about the extremist attack on a luxury hotel and shopping complex in Nairobi. - Associated Press

The Bangkok-based management of the Nairobi hotel that is part of the complex attacked by extremists on Tuesday says it is "devastated" by the assault.

Dusit International, managers of the Nairobi DusitD2 hotel, says in a statement on Wednesday it is "in constant contact with the authorities and would like to thank them for their swift response".

The statement said the hotel is closed and guests and those with reservations have been found accommodation in other hotels in Nairobi. - Associated Press

A picture of a woman serving tea to police officers at the scene of the attack has gone viral on social media.

Kenyan police say there is still "an active security operation" in and around the hotel complex attacked by Islamic extremist gunmen amid sporadic gunfire from the scene.

At least 15 people were killed in the attack which started on Tuesday by suicide car bombs followed by at least four armed men who invaded the hotel and shops.

Police on Wednesday urged people to stay away from the crime scene until it is declared fully safe.

Scores of people were rescued at daybreak as police continued what they called a mopping-up exercise.

Gunfire has been ringing out at the scene even after authorities announced that all was secure following Tuesday's attack. - Associated Press

08:26A woman reacts as she is reunited with family after being evacuated from the DusitD2 compound in Nairobi after a blast followed by a gun battle rocked the upmarket hotel complex. (Picture: AFP) 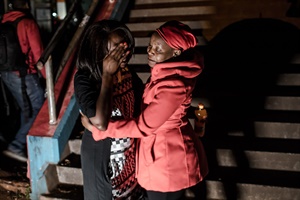 08:23Grief-stricken Kenyans flocked to a morgue in the capital, Nairobi, on Wednesday to look for loved ones among at least 15 people killed in a militant attack on a hotel complex, as workers still trapped pleaded for help. – Reuters GET THE FULL STORY HERE

Dozens of people are reuniting with friends and family after being trapped for more than 12 hours in a hotel complex under attack in Kenya's capital.

Survivor Lucy Wanjiru says she had been trying to flee when she saw a woman on the ground floor get shot.

Wanjiru ended up in a washroom with several other scared people. Her friend Cynthia Kibe stayed in contact with her by phone overnight.

And then at one point she was like, 'Please tell me I am getting out of here alive' and then it was just like my breaking point." - Associated Press

The attack was claimed by the al-Qaeda-linked Somali group al-Shabaab, which has repeatedly targeted Kenya since it sent its army into Somalia in October 2011 to fight the jihadist group.

The attack at DusitD2 is the first in Nairobi since gunmen stormed the city's Westgate shopping mall in 2013, killing at least 67 people.

On April 2, 2015, another Shabaab attack killed 148 people at the university in Garissa, eastern Kenya.

The Westgate attack resulted in many upscale establishments and shopping centres in the capital - including the Dusit - putting up strict security barriers to check cars and pedestrians.

Several Nairobi establishments popular with westerners announced on social media on Tuesday that they had closed for security reasons.

In its statement, the group noted the attack came exactly three years after its fighters overran a Kenyan military base in Somalia.

"This attack on Nairobi hotel came as Kenyans and their media are commemorating (the) El Adde attack," it said.

The Shabaab claimed it killed more than 200 soldiers in that assault. The government has refused to give a toll or disclose details. - AFP

CCTV footage broadcast on television showed four attackers, clad all in black and heavily armed, entering a courtyard in the compound at the start of the assault.

John Maingi said there had been "a flash of lights and a loud bang" at the Secret Garden restaurant where he works.

"When I peeped outside I saw a human leg which has been cut off. We hid in the room and then some police officers rescued us," he said.

Reuben Kimani, a barista who was rescued after several hours trapped inside the hotel, said he recognised one of the attackers as a client."I knew one of them because he had a big scar on one of his hands," he said. "I saw them. They shot six of my friends, four didn't die but two succumbed." -