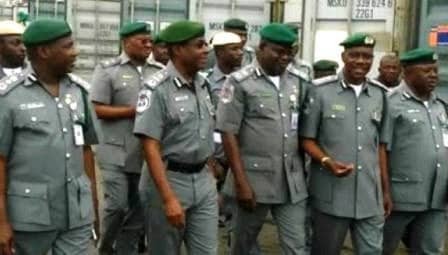 #Army lieutenant and 2 Others Killed As Customs Clash With Smugglers In Oyo.

The igbo-Ora town in Oyo state, Nigeria, became very hot and uncomfortable to the  residents and businesses owners as  clash emerged between the Nigeria custom service officers(NCS) and some smuggulers in that community.  It was reported that atleast, three persons were killed which includes the army lieutenant of Nigerian, "Ltr. Josiah Peter" in the cause of this clash which occurred at the Igbo-Ora town of Oyo State. “Olugbemiga Fadeyi" the State Police Public Relations Officer, confirmed to this reports on death of the soldier and others as victims of the clash to be true.

In his statement he said,the police has commenced investigations into the clash that occured between customs officers and some suspected smugglers in Igbo-Ora town which led to the death of a lieutenant of Army as a result of gunshots he sustained. “In a swift response to assist the FOU team, the Border Drill Patrol also came under attack and one Lieutenant of Nigerian Army Josiah Peter was shot and later died. meanwhile Investigation has commenced. And he Futher state that, the suspected smugglers must surely be brought to book.