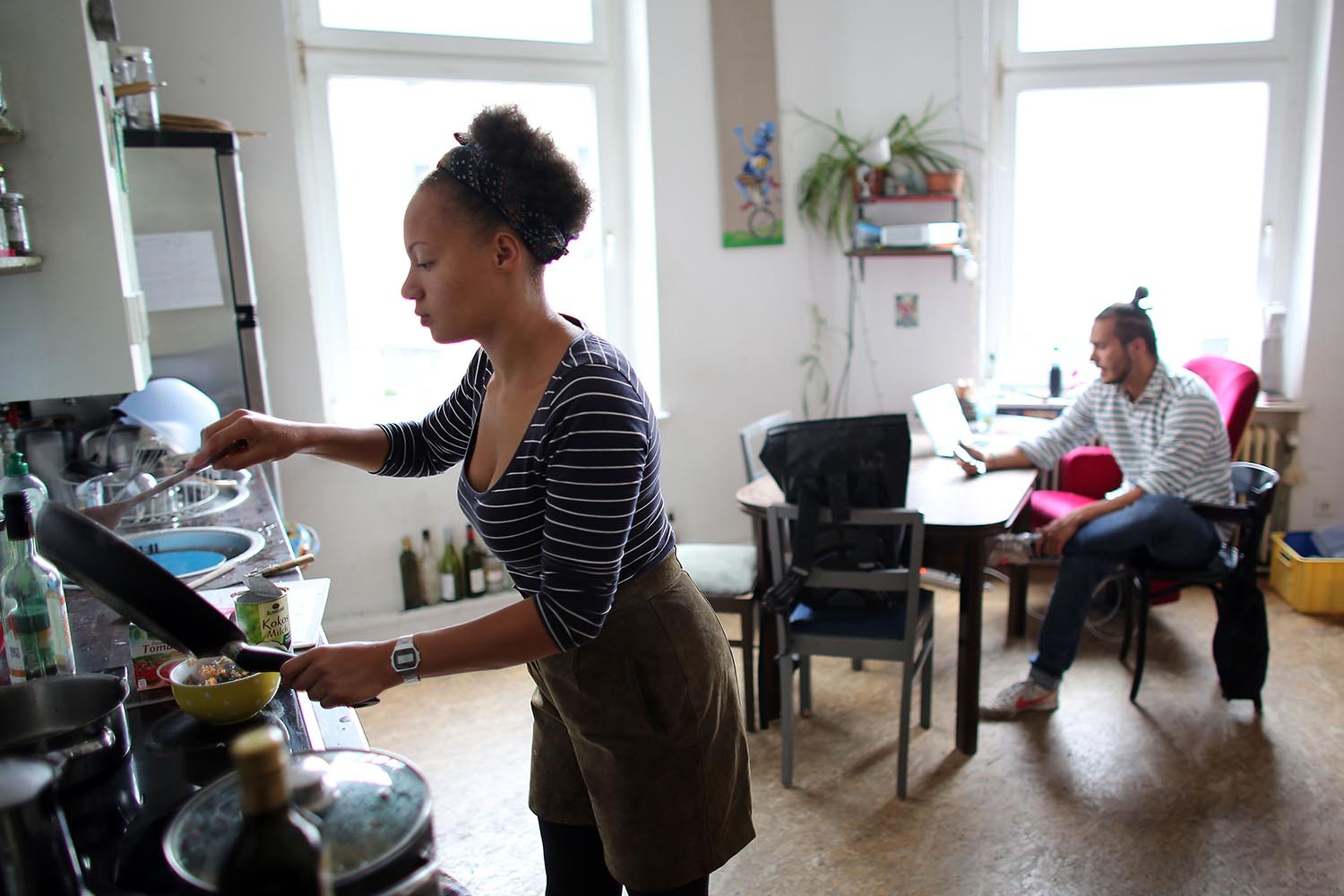 Berlin, like other major German cities, is in the midst of a housing crisis, with people struggling to find accommodation. Sexual predators are taking advantage of this situation, reports Sarah Wilson.

When expat Laura Rosell, 34, turned up for a flat viewing in Berlin in late 2016, everything seemed normal at first.

The flat was being rented out by a middle-aged man, and, although it was very small, “it was cheap, he seemed pleasant enough, and I was desperate – as is everyone – so I was considering it,” she tells The Local.

It didn’t take long, however, for Rosell to realize that something wasn’t right. While chatting about the washing machine, “he explained that he'd prefer if we put our clothes together into some sort of mixed laundry load,” Rosell says.

It's a request she found a little strange but not a red flag, until he added '..and I prefer to do that alone'.

At this point, says Rosell, a dread came over her as she realized “this guy had some kind of women's clothing fetish".

"I should also mention that the apartment layout was so narrow that I realized I'd feel unsafe about having no 'escape' space around him if he stood in the middle of any of those places," she adds.

After hastily turning down his offer for the flat, “the man invited me [online] to spend more time with him," she says. "I'm pretty sure I didn't reply, and I certainly didn't say yes."

Unfortunately, her experience is no anomaly among women in Berlin today.

For several years now, Berlin – alongside other major German cities – has been facing a growing housing crisis.

An explosion in population (growing by about 50,000 a year over the past five years) has led to major housing shortages, decreased availability of social housing and rental prices up across the capital by 46% since 2009.

Mention flat-hunting to anyone who’s tried it in Berlin and in return you’ll hear countless tales of viewings with hundreds of hopefuls lining the stairs, elaborate scams and endless WG “castings” that rarely end in success.

It’s a situation that leaves many frustrated. But for women in particular, the consequences can be even more sinister – and sometimes downright dangerous.

However progressive some may deem Germany to be, the country still has undeniable problems with sexual harassment and assault.

Half of the women in Germany have experienced sexual harassment. Today, in the capital's tough rental market, predators have found new ways to exploit women – taking advantage of the fact that many are new to the city and desperate for a place to live.

It’s a situation that Rosell, a freelancer originally from the US, knows all too well.

Not long after her unsettling experience in 2016, she received another offer from a man who claimed that "he wanted a roommate who would also be his (intimate) partner and become a disciple of his spiritual wellness system as well as help him with administrative things in his business".

Across Germany, the custom of living in WGs (shared accomodation) ordinarily leaves the selection of new tenants up to the existing or main tenant(s), an arrangement that can create a power imbalance.

Indeed, Karen*, an expat also from the US said that during her search for an apartment, she saw a lot of ads online from middle-aged men looking for young female roommates.

"Several of them contacted me through WG-Gesucht, but I never met them," she says.

"A part of me felt guilty for not giving them a chance, but something about the situation always felt wrong. Why would a man 20 years older than me want to be my roommate?”

In bigger German cities such as Berlin and Frankfurt, finding student accommodation can be difficult. Image: DPA

Currently, “official” flat-finding channels like WG-Gesucht and Immobilienscout have options available for reporting scam ads, but little information on what to do in cases of inappropriate behaviour.

Representatives from WG Gesucht told The Local that they are quick to “delete accounts with offensive ads and messages, admonish the users and block the accounts".

"In case of a continued inappropriate use of our service, we also reserve the right to take legal action against those users," the company added.

They also claim that ads of an inappropriate nature are “very rare".

By and large, however, the ad sites like WG Gesucht pertain to legal sublets, where the local authorities will be aware who is living in the flat. Higher authorities like the Hausverwaltung (house administration) or the landlord/lady can be approached with any problems.

The issue for many foreigners, however, is that renting through these official channels often requires a mountain of paperwork that most don’t have - or even know about - immediately upon arrival.

Consequently, many are forced to look through “unofficial” channels like Facebook and Craigslist, where advertised sublets are frequently illegal - lending more power to the sublessor and leaving the lessee more open to exploitation.

Who is responsible for removing dubious offers?

The Berliner Mieterverein – the Berlin Tenant’s Association – suggested to The Local that in the case of dubious offers “the platform operator should be notified immediately so that the sender of the ad is blocked”.

When 26-year-old Rita Macedo tried to report inappropriate behaviour to WG Gesucht, however, she noted that there was no function for doing so.

A man she spoke to on the platform escalated their conversation to “him saying that if I were to live with him, he would like to take semi or total naked pictures of me in 'our' house".

She adds: "He proceeded to send me pictures of half naked girls he supposedly photographed and even though I said I was not interested in that he just kept on pushing”.

Yet without a report function on the website, Macedo was horrified to see that “months after I noticed that the guy was still posting offers, same name, same address, same pictures.”

Though the Berliner Mieterverein admits that the Berlin housing market is "very tense" and finding a place to live can become a "real problem”, they suggest that “women should not engage in dubious deals” and should “stay away from [unreliable] housing offers” from the outset.

In some cases, however, the approach comes from landlords or lessors themselves.

WGs are common in many German cities. Image: DPA

“The whole personal appearance-based component to house-hunting here makes it a little unsettling right off the bat, in a way that it shouldn't need to be”, she tells The Local.

As an illustration of how this access can be exploited, Rosell explains how she received a “semi-notorious” email during her flat-hunt from a man who “offers to be your slave in a very detailed email”.

It struck her after talking with other women, that she isn't the only woman who has received it and that he must have been picking and choosing who he was sending it to.

Harassment from a roommate

It’s not just during the search that women find themselves in danger either.

About a month after moving into a WG, Karen’s flatmate started to behave inappropriately towards her, “stand[ing] too close to me in the kitchen”, touching her as he passed by and staring at her body.

At one point, says Karen, he told her 'I won't have any contact with a woman unless sex is an option' before looking her up and down and adding 'that includes you. You're a very beautiful woman'.

His behaviour made Karen feel extremely frightened and uncomfortable, but she felt trapped in the flat:

“I lived like this for a few more months because I was terrified of going back to the apartment search," she says.

Eventually, Karen managed to move out, though not without difficulty. “I lied and told him I was moving in with my boyfriend, and he seemed to take this as rejection," she says.

In the end, she was forced to get legal counsel to disentangle herself from him, and was still forced to pay an extra month of rent.

Later, she went to the police, fearing another woman might go through what she had. After 10 months, she was forwarded an apology letter from the perpetrator. She said the police told her the only reason her case went that far is because the man had touched her. "If he hadn’t...nothing would have been done," she says.

'If the police can't protect you, who can?'

In spite of strict subletting laws in Berlin, enforcement is rare and illegal sublets still rife.

The police and the law, too, are lagging behind rapid changes to the housing market and the problems it’s engendering, leaving women unsure of who to turn to when they find themselves in these situations, or indeed whether it’s worth reporting at all.

“This city's police might need to consider updating the way they handle cases [of predatory/inappropriate tenants]," Rosell says.

"We're powerless; 'your Hausverwaltung holds the power' sounds a bit ridiculous," she adds.

"I mean, if the police can't protect you or de-escalate a situation like that, who can? And how?”