R. KELLY’S DAUGHTER FORCED TO DROP OUT OF COLLEGE AFTER HE STOPPED PAYING TUITION 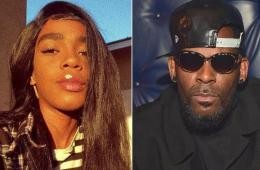 *R. Kelly’s daughter, Buku Abi, was reportedly forced to drop out of college after her father stopped paying the tuition, TMZ reports.

Buku, born Joann Lee, reportedly attended an art school in California. She was unable to enroll in courses after being informed about the unpaid bills. Buku claims this was one of the first steps Kelly made in cutting her off financially. He also allegedly stopped paying the rent for her college apartment and school books.

Kelly claims he stopped paying her school fees because he thought she dropped out. His Crisis Manager, Darrell Johnson, said the R&B star was willing to pay, but never received the proper documentation to prove his daughter was still enrolled at the college, Complex reports. According to his child support agreement with ex-wife Andrea Kelly, the singer must pay his children’s college expenses until they turn 23.

OTHER NEWS YOU MIGHT HAVE MISSED: Black College Student Slapped with 12-year Prison Sentence for Kissing a White Girl!

Dropped a new hit late last night: #BornToMymusic - Give you a taste of what the new album bringing! Coming soon!

9,892 people are talking about this

Johnson said Kelly is willing to fulfill his legal obligations once he receives proof that the money is being used for her schooling.

Buku has been very vocal about the strained relationship with her father in the wake of Lifetime’s “Surviving R. Kelly” docuseries. She previously called him a “monster” in a lengthy post on social media back in January.

“I just want you all to understand that devastated is an understatement for all that I feel currently,” she wrote. “I do apologize if my silence to all that is happening comes off as careless. That is my Last intention. I pray for all the families & women who have been affected by my father’s action. Trust, I have been deeply affected by all of this. It has been very difficult to process it all. Let alone gather all the right words to express everything I feel.”

Buku also confirmed that neither she nor her siblings or mother have spoken or had any interaction with R. Kelly in years.