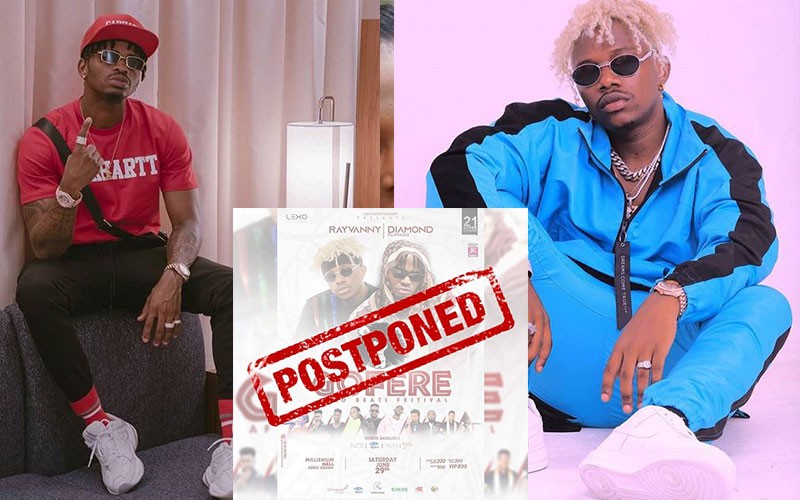 The eagerly awaited Go Fere Afro Beats Festival that was to be graced by Diamond Platnumz and Rayvanny on Saturday 23, 2019 has been called off until further notice.

The shows postponement comes days after a coup attempt in the host country, Ethiopia, by an army general in the northern state of Amhara left three officials dead.

Announcing the postponement on his Instagram page, Diamond Platnumz mourned with Ethiopians as he confirmed the event s cancellation.

“Gofere AfroBeats Festival in Addis, Ethiopia has been Postponed till further notice due to the Tragic Incidents that happened in Ethiopia. I send my deepest condolences to the affected families and to the people of Ethiopia......A new Date shall be announced very soon,” he wrote

Gofere AfroBeats Festival in Addis, Ethiopia has been Postponed till further (Photo: Instagram/diamondplatnumz)

According to Reuters, “the Baklaba and Cake cafe was heaving with customers when truck-loads of heavily armed men in fatigues rolled up across the road outside the local government headquarters in Ethiopia’s Amhara region.

Within moments, the assailants had shot dead Amhara’s president, an aide and fatally wounded the state’s attorney general.”

The Ethiopian police have however arrested 57 suspects from the Amhara political party believed to have taken part in the failed coup.

According to William Davison, senior International Crisis Group analyst for Ethiopia, the coup may worsen the country’s political and security state.

“The killings in Addis Ababa and Amhara are “a blow to Abiy’s democratization agenda and may well worsen Ethiopia’s political and security crisis if key issues are not urgently tackled,” he commented.