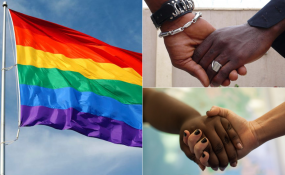 The chief police spokesperson in Swaziland / Eswatini Superintendent Khulani Mamba has said that LGBTI people will not be tolerated in the kingdom and should not be given a platform.

He said, 'We say no to homosexuality, this country will not tolerate the LGBTI [lesbian, gay, bisexual, transgender, intersex] community,' the Times of Swaziland reported on Wednesday (26 June 2018).

His comments came after the Swaziland Police gave permission for the first-ever LGBTI Pride event to take place in the kingdom on Saturday (30 June 2018).

Mamba made his comments from the pulpit in Ezulwini during annual prayer services on Sunday, the Times reported. It described Mamba as a 'prophet'. It added he spoke in a personal capacity and not as a police superintendent.

Meanwhile, the Swazi Observer is standing by its report that contained hate speech, despite criticism. Over the past week it and its companion newspaper the Sunday Observer have published three prominent articles that called LGBTI people 'a curse' and 'evil' and likening them to child sex molesters and people who had sex with animals.

The articles broke Article 13 of the Swaziland National Association of Journalists code of conduct which states, 'Hate speech: 'Journalists shall avoid by all means the publication of speech that might promote hatred, spite and conflict amongst the Swazi or any other nation.'

After the first article appeared on Thursday (21 June 2018) the Swaziland Human Rights Network UK condemned it saying, 'the spirit and text of the article is homophobic and divisive and goes against the basics of journalistic ethics of accuracy and fair reporting. The article makes a false equivalence between the gay and lesbian community and paedophilia, bestiality and rape'.

In a statement published on its website it said, 'The falsehoods raised in this article are not only homophobic but also indicative of a particularly desperate and divisive anti-gay and lesbian agenda by the Swazi Observer.'

Later, Goodwill Mathonsi the group's coordinator wrote an email of complaint to the Observer editor Thulani Thwala saying it had broken four articles in the code of ethics, including hate speech.

Hate speech is a type of speech or writing which can do any of the following: deliberately offend, degrade, intimidate, or incite violence or prejudicial action against someone based on their race, ethnicity, profession, national origin, religion, sexual orientation, or disability. It can be aimed at an individual; or racial, ethnic, religious or other group. Such speech generally seeks to condemn or dehumanize the individual or group; or express anger, hatred, violence or contempt toward them.

In his response, Thwala did not address the matter of hate speech. He wrote, 'Rule number one of journalism to balance views was achieved. Since we live in a free country it is every person's right to frown upon anything.'

He wrote, 'I am certain you are aware that we cannot force people to see things the way we do no matter the circumstances. I cannot guarantee special treatment for any groupings.'

Swazi Media Commentary also sent an email of complaint to the editor of the Swazi Observer but received no reply.

The Observer does give special attention to one group: the monarchy. It is in effect owned by King Mswati III who rules Swaziland as sub-Saharan Africa's last absolute monarch. In a report on press freedom in the kingdom the Media Institute of Southern Africa called the Observer a 'pure propaganda machine for the royal family'.

In January 2011 Alec Lushaba who today is editor of the Observer on Saturday wrote in the Weekend Observer about the newspaper's values. He said, 'We commit ourselves into respecting and observing the institution of the Monarchy by ensuring that all publications with regard to Their Majesties are factually, culturally and traditionally correct. The sensitivity of the institutions demands that all facts be checked or verified with the traditional structures and/or have been in direct consultation with Their Majesties.'