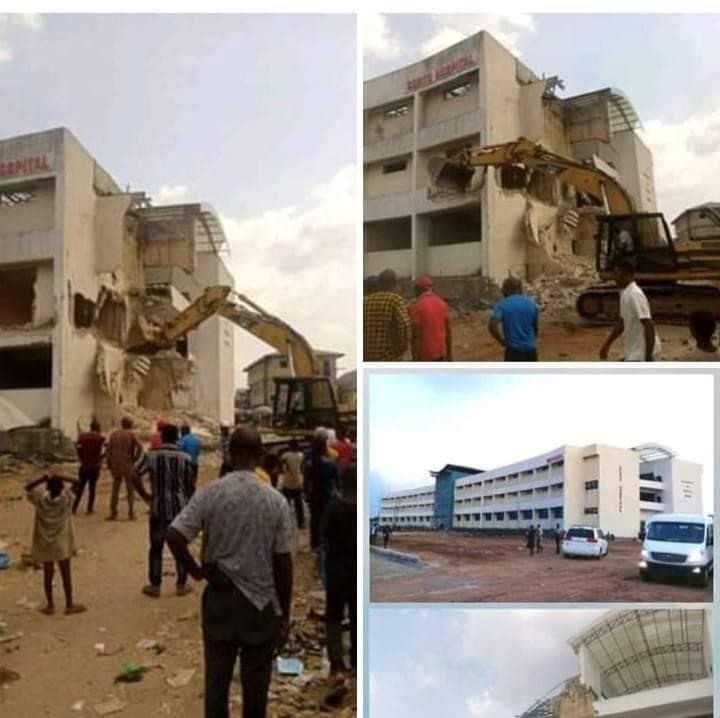 A state-of-the-art hospital built by the immediate past governor of Imo State, His Excellency Owelle Rochas Okorocha is at the moment being demolished by the current governor of the State, Chief hope Uzodimma, in what many commentators have described as a badly thought-out act of political vendetta.

The hospital built with Imo funds had been fully completed, structurally, while, the necessary hospital equipment are the only things awaited for the hospital to kick into full operations.

The hospital named Somtochukwu Hospital is one of the over 30 hospitals initiated or completed by the Okorocha administration in eight years of holding sway, and is also a major legacy of the Okorocha administration, as it situated at a site of a major market relocated by that administration, in keeping to the advice of respected development experts and safety professionalism, since the said location of the said markets had posed some security and and health challenges, as disrupting the modernization and urbanization ambitions of the State Government.

Okorocha had built new markets in Egbeada, Ubomiri, Naze, Akwakuma, Amakohia and Ohi; all suburbs of the capital city, before relocating the old Ekeonunwa market. More than 10,000 shops were built at these new locations to meet the surging demand by traders.

However, the uzodimma administration, in what some people believe is a misdirected political vendetta, ensured that some of the new markets are not occupied as he encouraged traders to return to the old market located in the heart of Owerri city.

According to Chief Joseph Nze, a community leader in Owerri; the idea of demolishing the new hospital is an affront on the people of the State. "This hospital and many other such structures built by the Okorocha administration were not built with the former governor's personal funding, but state allocations and revenue. As much as this looks very personal, we only look to hope there is a plan we don’t see yet.