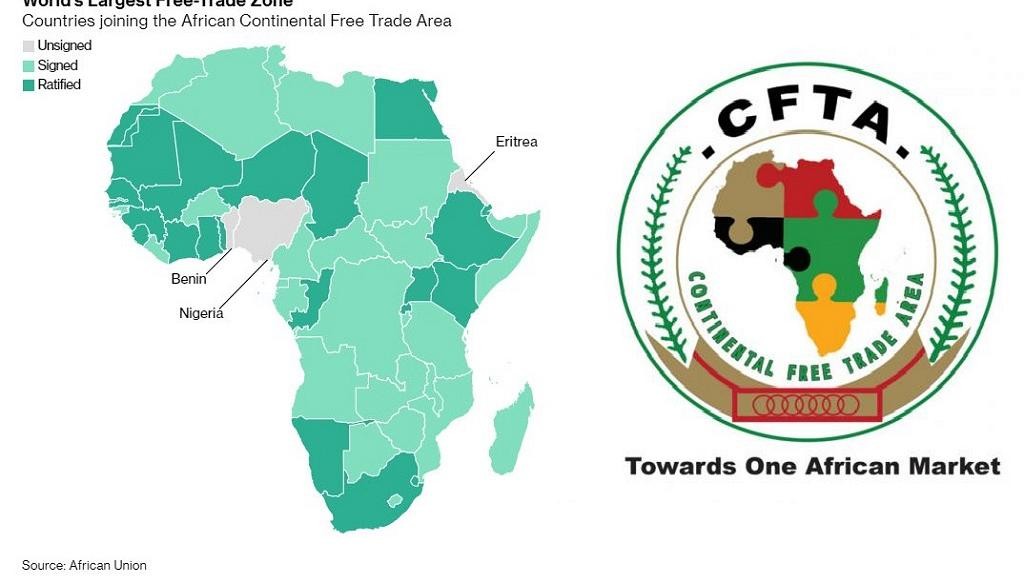 A lot is being said and celebrated about the African Continental Free Trade Area, AfCFTA, in the wake of its maturity on Thursday (May 30).

The African Union, AU, initiative aims to create a continent-wide market of 1.2 billion people worth $2.5 trillion. Different African countries have made varying levels of commitment.

The highest being the ratification and deposition of necessary documents with the AU. The other class being the signing of the agreement and the non-commitment level being those that have yet to even sign up.

The unsigned group comprises three countries: Nigeria, Eritrea and Benin. In effect, fifty-two of the AU’s 55 member states have signed the agreement to establish the free trade area since March 2018.

A notable exception of Nigeria, the largest economy on the continent, had raised eyebrows across the continent but the government insisted that it was conferring with stakeholders back home before committing to the deal.

Its former president Olusegun Obasanjo has been critical of the government’s decision. In the case of Eritrea and Benin, there has been no official reason for their continued silence on the deal.

In March 2018, 44 government representatives signed the deal at a meeting in the Rwandan capital, Kigali. Countries that have so far ratified include: 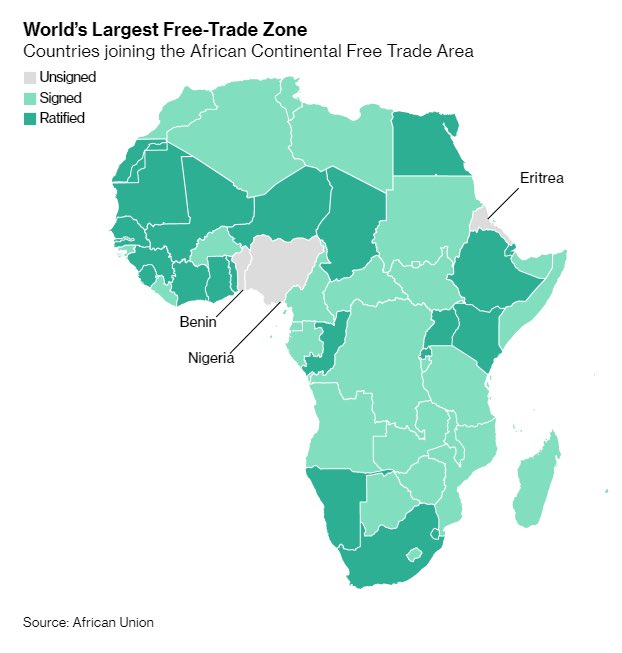 This means free trade is possible within 24 countries, reaching half of Africas population. Once all countries have signed (only 3 to go!) the agreement will help 1,3 bill. people on the continent

17 people are talking about this

The African Continental Free Trade Area had been ratified by 22 countries by April 29, the requisite number for formally notifying the AU. That paved the way for it to take effect 30 days later as stipulated in its statutes.

Some of Africa’s other economic heavyweights, including Ethiopia, Kenya, Egypt and South Africa, are among the 24 nations that have formally ratified it. In the last month, Zimbabwe and Burkina Faso joined the fold.

The agreement’s operational phase is to be launched on July 7 at an AU summit in Niger.

There are still a number of outstanding issues to be resolved, including arbitration measures, certifying the origins of goods, tackling corruption and improving infrastructure.

The AU envisions the free trade zone, once fully implemented, driving economic integration and spurring investment within the continent.

It hopes the progressive elimination of tariffs will help boost intra-Africa trade by 60 percent within three years. At present, only 16 percent of trade by African nations is with continental neighbours.

Advocates for the trade zone say it will help develop African economies long driven by a focus on resource exploitation, and provide a platform for negotiating with markets beyond the continent.

But critics say poor infrastructure and a lack of diversity between the various economies could throw up barriers to this envisioned integration.

The African Union hopes a progressive elimination of tariffs will help boost intra-Africa trade by 60 percent by 2022.