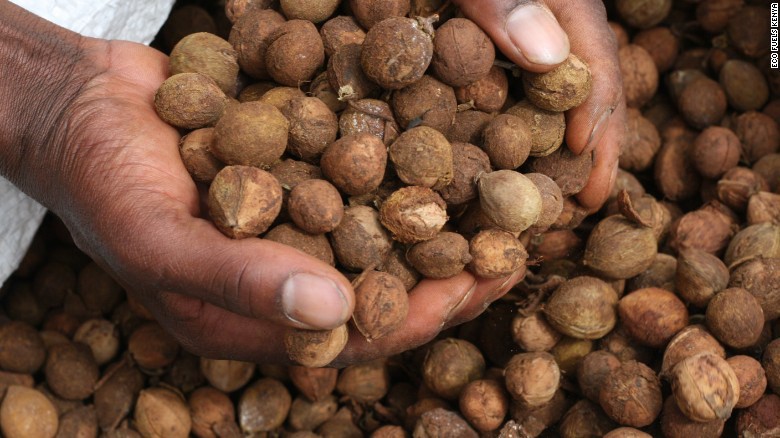 The much-hyped jatropha crop saw millions of dollars and vast tracts of land squandered, while the production of palm
oil has been widely criticized for association with environmental damage and human rights abuses.
But there is a new hope for the field. The Croton megalocarpus tree is common throughout much of East and Central
Africa, and until now it has been used for little more than firewood.
The nuts of the tree have been shown to contain high concentrations of oil and protein, and they are now being used to
produce a fuel that could serve as a clean alternative to diesel.
With an abundant supply of croton nuts available at minimal cost, a new industry is emerging with sky-high ambitions.

Low-hanging fruit In 2012, serial entrepreneur Alan Paul established Eco Fuels Kenya (EFK) to explore the potential of croton, following
early research that suggested promise. His company is now the driving the movement to bring croton biofuel to the
mainstream. The business took a low-key approach at first, in contrast to high-budget flops such as jatropha.
“(Paul) said we can grow organically by sourcing what is already there from one of the most common trees,” says EFK
Managing Director Myles Katz. “We can buy nuts from farmers so they get an income and we have a business model that
does not require $10 million of funding and a big plantation to get off the ground.”
EFK put out radio ads to attract local entrepreneurs into partnerships, who assembled teams of smallholders to supply
the nuts. When suppliers realized their previously useless trees had become an easy and reliable source of income, the
network rapidly expanded.
This has enabled EFK to double production each year, says Katz, up to 1,000 tons of nuts this year from 500 tons in
2015. The company is now in a position to scale up the operation, without having planted a single tree.

“It is comparable to any other nut or oil pressing facility,” says Katz. “We modify the equipment to work on croton nuts but essentially we are buying machines used with walnuts or macadamia nuts.”

Much of the fuel is sold to local businesses that run generators, such as tourist camps.

The company has also branched into selling by-products of the nuts, including seedcake from the pressed nut as poultry feed, and organic fertilizer from the shells. This offers insurance at a time investors remain wary of biofuels, says Katz.

“The ‘unknown’ (element) is hard for investors,” he says. “We are not an oil-only business, and we can stand on different parts of the business at different times.”

Grand plans, local roots
Having local networks of suppliers and agents is key to the EFK business model, and a critical challenge for the company is to maintain these networks while expanding across the country and beyond.
“We have a completely local approach,” says Katz. “Everything we source, process and sell should be within 100 kilometers of the factory.”
The company plans to maintain this approach while creating up to five new factories in Kenya and several more in neighboring countries such as Tanzania in the coming years.
EFK is also planning a first foray into an “orchard model” of planting its own trees on a 500-acre plot in 2017, that will allow the company to test and push the limits of croton capacity.
“There is an interesting topic of crop efficiency,” says Katz. “An indigenous tree with access to normal rainfall might produce 100 kilograms of nuts a year. But the optimum trees will produce over 300 kilograms…The ‘orchard model’ can change outcomes dramatically.”

Croton can succeed where other biofuels have failed, according to Dr. Gerald Kafuku, principal research officer of the Tanzania Commission for Science and Technology, who has published several papers on the properties of croton oil.
“I can say that croton is one of the most promising sources of biofuel,” he says. “It can give advantages in the form of biodiesel or straight oil, and as a ‘carbon sink‘ for afforestation.”
Kafuku believes that only a lack of funding for research and development is holding croton back from the mainstream. He adds that the region urgently needs such solutions.
“East Africa is among the areas where there is significant environmental degradation,” he says. “New biofuels such as croton can add to the alternative sources of renewable energy as well as providing for more planting of trees.”
Croton can also avoid the ethical pitfalls of other biofuels by benefiting local communities, according to Rodrigo Ciannella, head of the biofuels program at the World Agroforestry Centre.
“(Croton) is providing value from a natural resource that is already abundant in the country and is largely wasted,” he says. “Farmers are already benefiting from receiving additional income…and they could get even more by having access to other components of the value chain such as fertilizer.”
With global demand for biofuels set to increase steadily, Katz believes it is a matter of time before oil giants enter the croton market and the nut becomes a major industry that can rival fossil fuels.
“I like to tell people that croton will be a coffee or tea type of value chain,” he says. “There will be lots of competitors and regional processing all over East Africa.”