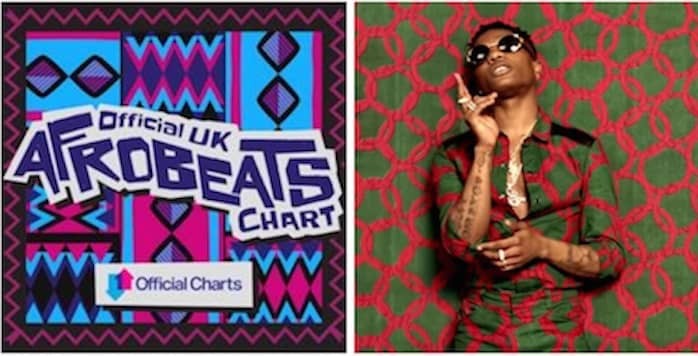 Nigerian popular music star Wizkid has retained the top spot on the UK’s Official Afrobeats Chart with the hit song, ‘Ginger’. Wizkid was very lucky to hold the chance of retaining the position because the Burna Boy-assisted song has now taking two weeks at number one and 12 weeks on the chart.

Meanwhile Starboy’s other song on the chart, ‘Essense’ featuring alt-RnB singer Tems, also saw another week at no. 2. Both songs are off Wizkid’s acclaimed and record-breaking album, Made in Lagos.

However, acknowledging other slew of songs by Nigerian artists make up the top 10, including ‘Loading’ by Olamide and Bad Boy Timz, ‘Jowo’ by Davido, and ‘Damn’ and ‘Godly’ by Omah Lay. The UK Afrobeats Singles Chart is a record chart compiled in the United Kingdom by the Official Charts Company (OCC) to determine the 20 most popular singles in the Afrobeats genre.

This charts is recommended to be one of the world’s first official charts for the genre, the Chart is well arranged using UK sales and streaming data from over 9,000 outlets, incorporating audio and video streams, downloads and physical sales. Wizkid moves to this greater length of retaining this  position is a bit of record breaking among the Nigerian music stars.