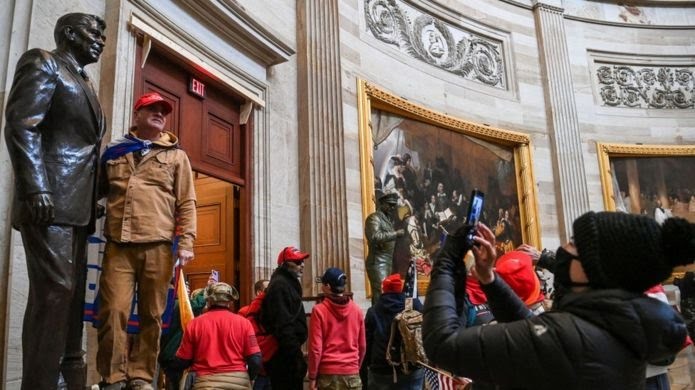 Protesters in support of the US incumbent President Donald Trump  swarmed the Capitol building, forcing officials to seek safety for the lawmakers and halting debate in both the Houses. Congress was meeting to confirm President-elect Joe Biden's electoral college victory. Whereas the incident occurred at about 2pm on Wednesday, 2021.

However, some of the  supporters of Donald Trump try to break through a police barrier as the protest is going on at the Capitol building in Washington. The Protesters soon overwhelmed the Police operatives outside as many others breached security and entered the Capitol building, creating a scene of chaos and causing members of Congress to run away from the House and Senate chambers to be safely locked down in their offices while some were evacuated elsewhere.
The Police officers with guns kept watching as protesters try to break into the House Chamber while some of them carries confederates flags into the hall after breaching the security.
As the demostrations escalated, Trump promptly tweeted of his vice president, Mike Pence, who was presiding over the congressional vote tally, then urged his supporters to “Stay peaceful!” while they should be expecting a positive turn out of their protests.