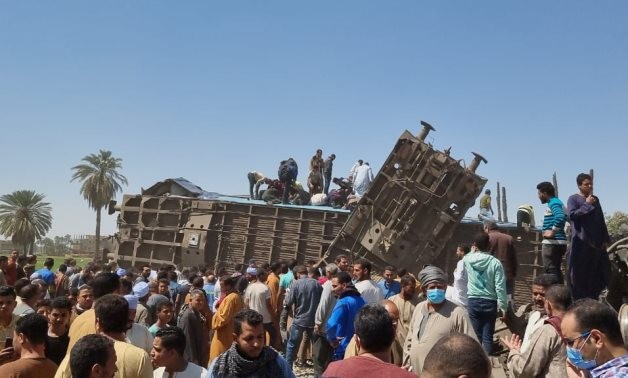 The Egyptian ministry of Health announced toll of the injured people in a collision of two trains in the city of Tahta in Sohag, the Upper Egypt, on Friday rose to 108 from 91 so far, while the number of deaths reached 32.

The Egyptian Railway stated that, the Authorities initially thought that the accident was caused after unknown passengers pulled the emergency valve of a Luxor-Alexandria train leading it to stop and get smashed by an Aswan-Cairo train from behind. The collision led to overturning of 2 passenger carriages and a locomotive.
However, the Ministry of Health increased the number of the ambulance to 74 to transport the victims to the hospitals, adding that all hospitals in Sohag have enough stock of blood bags, with additional 3,000 bags.
Reacting by the Egyptian President Abdel Fattah El-Sisi, he said a “deterrent punishment” will be inflicted on whoever caused by any means the “tragic” train collision in Sohag to take place.